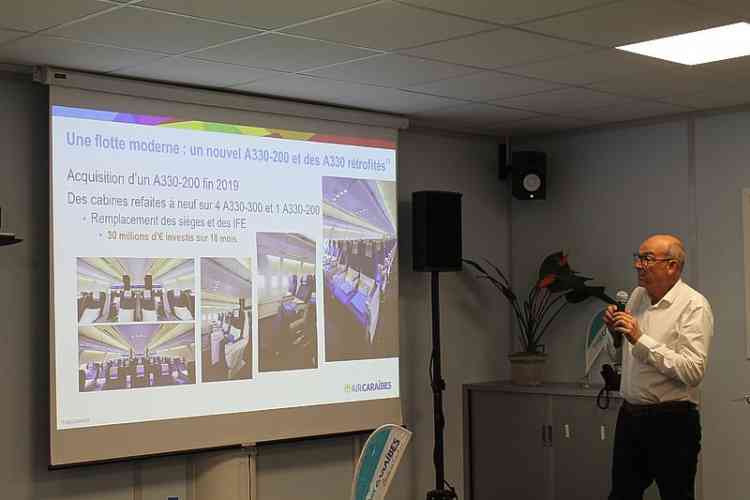 Air Caraïbes Director General Olivier Besnard points to a screen showing acquisition of a new A330-200 for the end of 2019 and cabin refurbishing for four A330-300 planes and one A330-200. (Robert Luckock photo).

MARIGOT/POINTE-À-PITRE–Air Caraïbes, the airline specialising in the French Caribbean, has seen a 6.3 per cent growth in its transatlantic service in 2019 and an overall 8.7 per cent growth of its combined operations in 2018 and 2019, the airline’s executives announced at a press conference at Air Caraïbes headquarters last Thursday.

The long-haul route between its Paris hub and the French Antilles saw 1,344,000 persons transported in 2019 while the regional market saw a 2.4 per cent increase with 333,000 passengers travelling in 2019.

The figures warrant the ordering of new planes to perpetuate the airline’s commitment to offering more efficiency and comfort to its clientele. The end of 2019 will see a new A330-200 coming into service. A third 389-seat A350-900 joined the fleet in July 2019; 18 seats in Madras (first class), 45 Caraïbes (business class) and 326 in Soleil (economy).

The airline has invested some 30 million euros during the past 18 months, including retrofitting the cabins of four A330-300 aircraft and one A330-200 aircraft.

Air Caraïbes is the first French airline to acquire this new-generation plane and the fifth in the world. It is not only built from a light carbon construction but is fuel-efficient, quieter, reduces CO2 emissions by 25 per cent and enables a six per cent reduction in seat cost. By 2021 the airline expects to have 11 aircraft servicing its transatlantic route.

The airline’s impact on tourism in the French Antilles has seen a six per cent growth in Guadeloupe and nine per cent in Martinique. Its 2020 forecast is to have an average 20 per cent increase across the board for its services Paris Orly to Pointe-à-Pitre, Paris Orly to Fort-de-France and Paris Orly to Cayenne.

There will be three daily flights for Pointe-à-Pitre and Fort-de-France, 21 per week for Pointe-à-Pitre and 18 for Fort-de-France. A sixth flight has been added to French Guiana and a third flight for St. Martin with the A330-200. The Paris to Havana, Cuba, route will have four weekly flights while Air Caraïbes will be the first French airline to serve Punta Cana in the Dominican Republic with four weekly flights.

Air Caraïbes Director-General Olivier Besnard told The Daily Herald when asked that he was not concerned about the slow pace of reconstruction at Princess Juliana International Airport and confidence in the destination was still high.

“We were the first airline to come back to St. Maarten after the hurricane,” he said. “We were operating one flight per week with not many passengers and it was very complicated at the airport, working outside in tents. It was a difficult time.  We also increased the flights to Grand Case to four or five a day.

“We took the decision one year ago to operate two flights per week to St. Maarten from Paris, and now I am pleased to say that we will increase that to three flights per week in January 2020. Tourism and reconstruction are coming back better and better. We have a 30 per cent increase in passenger traffic to St. Maarten. The third flight is good for us and good for the island. It’s a profitable route for us.”

Aside from the French media, the press conference was attended by tourism stakeholders, Guadeloupe’s and Martinique’s directors of tourism, both islands’ airport directors, and Conseil Régional in Guadeloupe President Ary Chalus.