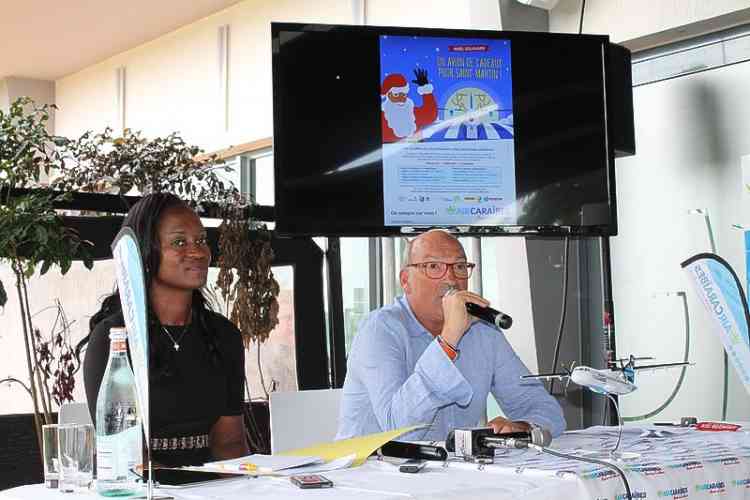 MARIGOT–Air Caraïbes promoted its special Christmas event for children in St. Martin with a press conference in Guadeloupe on Wednesday attended by the local media and all the partners involved in the initiative.

“This event is an opportunity for Air Caraïbes and its partners to reaffirm its engagement at the side of the St. Martin population after the catastrophic hurricanes in September,” said Besnard. “It shows our strong willingness to preserve the magic of Christmas.”

Air Caraïbes has appealed to the generosity of inhabitants from Guadeloupe and Martinique to donate presents and toys for St. Martin children, a collection that continues until December 15. The objective is to give one present per child, ages 3 to 12 years old, to an estimated 3,500 children.

Vice-President Damaseau explained all districts and associations were asked to give an estimated count of the number of children who they felt would be deserving of the presents, in the age group mentioned. She noted the total number could reach 5,000 but that would not be a problem.

“We are very grateful and thankful to Air Caraïbes and their partners for this initiative, and I want to thank all the St. Martiners who are living here in Guadeloupe as well,” she said. “The consequences of the hurricanes have had a traumatic effect on children and it is important to give them some joy.

“Again, I’m very happy with this partnership with Air Caraïbes. St. Martiners and their families need to rediscover the joy of Christmas and that’s the aim of our Christmas programme. I fully believe in the future of St. Martin that we will come back stronger. I thank everyone who contributed to this collective effort and combined solidarity.”

A special Air Caraïbes flight will be arriving on Wednesday, December 20, at Grand Case Airport laden with presents and Father Christmas himself who will jump into his sleigh and deliver the presents to the children on the Marigot waterfront.

The Christmas Serenade Festival organised by the Collectivité and St. Martin Tourism Office meanwhile continues in each of the six districts since its launch on November 26. The festive villages in each district highlight traditional Christmas fare, entertainment and goodwill and culminate with the grand Christmas concert on the waterfront on December 20.

Aside from the local artistes performing, special guest of the evening is the famous Christmas choral group from Guadeloupe “Cactus Cho,” performing without charge with some 20 singers and a backing band. President of the Association Cactus Cho Perran Tiburce was present for the press conference.

Air Caraïbes has made a film dedicated to St. Martin which will premiere on December 20 and will be offered to tourism partners to help relaunch the island’s tourism.