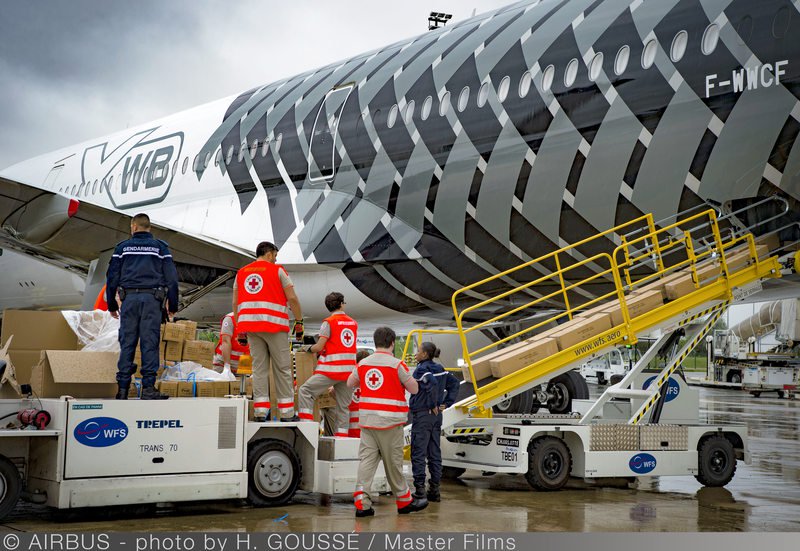 THE HAGUE–Large, internationally operating companies are showing their commitment to devastated St. Maarten/St. Martin and sending supplies. Boskalis from the Netherlands and the Airbus Foundation from France announced separately on Wednesday that they are bringing a large cargo to the island.

The Airbus Foundation and the French Red Cross have sent an Airbus A350 XWB test aircraft with 30 tonnes of emergency goods and 84 medical personnel from France to Pointe-à-Pitre, Guadeloupe, from where the transport will take place to St. Martin and St. Barths. Some of the goods will be distributed on other affected islands as well.

The relief equipment consists of generators, water sanitation machines, solar lamps, beds, and mosquito netting. The aircraft left Toulouse Wednesday morning to fly to Paris Charles de Gaulle to load 30 tonnes and 84 medical personnel provided by the French Red Cross. The A350 XWB took off to Pointe-à-Pitre, Guadeloupe where it is expected to arrive today, Wednesday at 6:30pm in Guadeloupe. The aircraft will bring back nearly 200 people evacuated from the impacted islands.

“We’ve all seen the devastation left in the wake of hurricane Irma and I speak for everyone at Airbus in wishing those who have lost so much a speedy recovery,” said Member of the Board of Directors of the Airbus Foundation and President of Airbus Commercial Aircraft Fabrice Brégier. “Providing swift relief is the least we can and must do.”

In the aftermaths of hurricane Irma several products of Airbus have been deployed by governments to bring relief to the devastated region: The German, British and French governments have used the A400M to transport emergency goods and personnel on three A400M to the Caribbean, the German Airforce sent an A340 to Florida bringing technical and logistical relief equipment.

Furthermore, satellite imagery has been provided to disaster response organisations via the International Charter on Space and Major Disasters. Airbus Aerial is providing insurance companies free initial access to its library of aerial base maps and data analytics of the affected regions to speed insurance claim processing.

Royal Boskalis Westminster, a global dredging and offshore contractor and maritime services provider, announced that it has mobilised a transport vessel at the request of the Dutch Ministry of Infrastructure and Environment to provide aid to the Windward Islands. On Tuesday, Boskalis loaded 40 pallets (40 cubic metres) of drinking water onto its vessel the Alpine in Curaçao and Aruba.

In addition to its own cargo, Boskalis also loaded a substantial amount of cargo from third parties, including a large disaster relief container from the Red Cross containing dry food and 45 pallets of food and water from the Royal Netherlands Navy. The Fairmount Alpine is expected to arrive in St. Maarten Thursday morning and will distribute the cargo among the three islands.

The Dutch relief organisation Cordaid will assist St. Maarten, mainly with restoring and constructing homes. Cordaid’s partner Caritas Antilles is on the way the way with a ship from St. Lucia with emergency supplies.

The ship of Caritas Antilles should be arriving shortly with a load of, among other things, food, water, blankets and hygiene articles for about 3,000 persons. Cordaid immediately made 200,000 euros available after the passage of Hurricane Irma for emergency supplies, including water, food, tarpaulins, wood and nails.

Cordaid continues to raise funds, through giro 667, to assist the St. Maarten people. Funds and goods are also being made available through Cordaid’s international network, Caritas Internationalis. A small Cordaid team should arrive Tuesday or Wednesday to assist victims. The Bishop of Willemstad Luis Secco will also visit the island for especially spiritual support.

Cordaid announced that it would focus on assisting with giving people roofs over their head, the restoring of homes and construction of hurricane-proof houses. The Catholic Church in Philipsburg is full of people who have sought shelter there because they lost their homes. Cordaid will also help to repair drinking water facilities and provide psychological assistance.

Meanwhile it was confirmed that St. Maarten will not be able to make use of the Solidarity Fund of the European Union (EU) after all. However, the Dutch side can make use of another EU fund for emergency, development and humanitarian aid, the European Committee has explained. St. Martin can expect assistance from the Solidarity Fund because it is part of France. As an autonomous country within the Kingdom, St. Maarten is merely associated with the EU.

Chairman of the European Parliament Antonio Tajani said on Wednesday in anticipation of a debate in Luxembourg that evening, that St. Maarten should get financial support from the EU in the reconstruction period. Tajani said that he would urge European Committee Chairman Jean-Claude Juncker to find a solution. “I think that we have to help these citizens, who have voting rights for the European Parliament and who have endured the same devastation as their French neighbours.”

The Netherlands Association of Municipalities VNG and the Red Cross have agreed that 50 per cent of the funds donated by the municipalities will be directly used for projects in the reconstruction phase, the period after the emergency relief. VNG will be involved in these projects together with municipality experts.

After the first phase of emergency assistance, the VNG will send a special mission to the Windward Islands to determine the exact contribution of the Dutch municipalities, naturally in close consultation with the Governments of St. Maarten, St. Eustatius and Saba, local relief organisations, the Red Cross and the national Dutch Government. Harbour and area development, waste and water management were mentioned as areas of expertise.