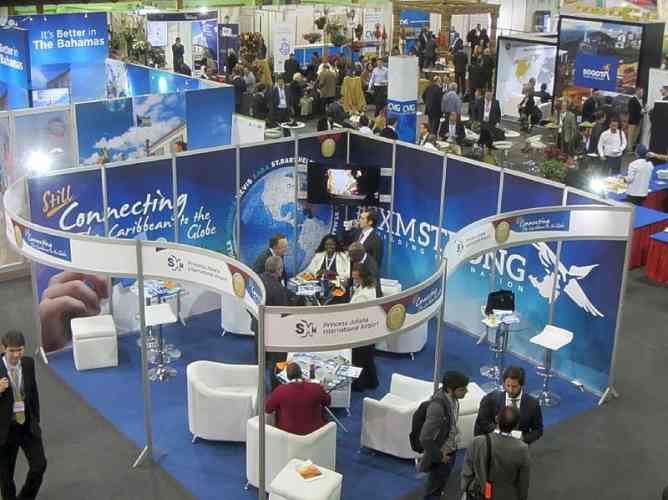 ECUADOR/AIRPORT–“Still Connecting the Caribbean to the Globe,” was the theme of the Princess Juliana International Airport SXM management team at the eleventh annual Routes Americas conference in Quito, Ecuador, February 13-15.

The airport represented the country also with the associated tag line “SXM Strong – Rebuilding Our Nation.” Both themes appeared vividly at the exhibition booth, which is strategically located at the heart of the Routes Americas exhibition hall.

The event allowed the airport team to network with international airline senior decision-makers.

The conference also offered the opportunity for the airport to build high-value relationships with some of the most influential aviation professionals in the region. The delegation was headed by Airport Chief Operations Officer (COO) Michel Hyman. The 650 delegates attending the conference included representatives of 147 airports.

In a press release from its communications department, the Airport confirmed a total of 14 key meetings with Southwest Airlines, Eurowings, Suriname Airways and Air Canada, amongst many of the legacy carriers.

The initial meeting sessions included a meet-up with representatives of the International Air Transport Association (IATA). IATA representatives were briefed on the reconstruction process and discussed how IATA can assist with the reviving of the Airport.

Another agenda point was Caribbean Aviation Day, which is set to be hosted in Barbados in June.

“The vital task at hand is to attract new air lift and service recovery to St. Maarten, while driving home the message that although we are in the midst of our recovery phase, we are actually open for business,” said Hyman. “Our hub partners were affected minimally by the recent hurricanes and are therefore even more so ready to reap the rewards of the potential partnerships.”

Although eager to bring home great partnership deals with the potential airlines, the delegation remained honest and open with information of the local hotel room inventory as shared by St. Maarten Hospitality and Trade Association (SHTA) and target dates of the terminal building reconstruction process.