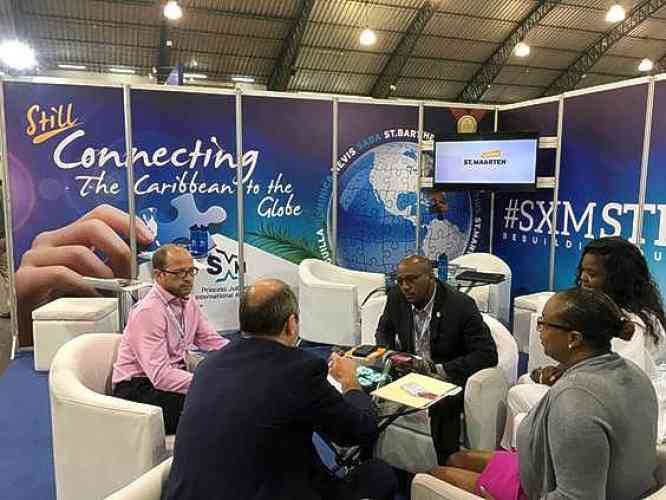 PHILIPSBURG—Princess Juliana International Airport SXM was featured in Routes News magazine’s online edition and will be in its printed edition before the end of the year.

The title of the magazine feature is “Three Questions for.”

Hyman explained that the purpose of being at the Routes Americas was to let the aviation community know that St. Maarten and its associated hub partners were opened for leisure and business travel. He further stressed that the theme for the reconstruction of the terminal building is “Rebuilding bigger and better,” and gave additional insight into the proposed United States (US) pre-clearance, which will allow passengers on US-bound flights to be pre-cleared effortlessly at the Airport. This is forecast to bring some additional one million passengers to the island.

“The Routes News editor was especially impressed by the fact that the Airport was operational again by October 10, 2017, a little over a month after the catastrophic hurricane Irma struck on September 6, 2017,” Hyman said.

Lake took the opportunity to announce that a temporary air-conditioned Departure Pavilion had opened recently, offering both food and beverage and retail concessions and a more comfortable experience for departing passengers, and that the Arrival Pavilion will be opened shortly.

Routes News was also given an update on the demolition of the interior of the Terminal Building, the reconstruction plan and the construction of a modern fixed-based operations (FBO) facility.

Routes Americas serves as the central network event where international senior airline decision-makers build high-value relationships with some of the most influential aviation professionals across the region.