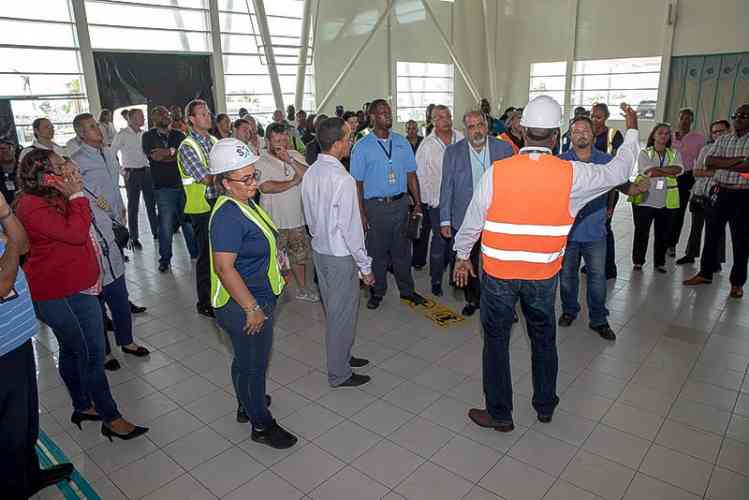 According to the Airport, the tour allowed partners to get a first-hand look at the progress being made on the mould remediation work, which is very important for the return of the temporary operations into the terminal building. The airport community currently operates from temporary Departure and Arrival pavilions.

The tour was led by employees of the Projects, Planning and Systems Control and Technical Departments, who assured everyone that the ongoing mould remediation and surface removal decontamination process is on schedule.

The attendees were cleared to view the areas where the cleaning of the mould contamination process has already been completed. They saw the Meet and Greet Hall, the Arrival Hall, Baggage Handling, Security and Departure Holding area. Project leaders of BMS CAT International, which was contracted to execute the works, gave details about the project to the audience.

The airline schedules for the 2018-2019 high tourist season reveal an increase in flight and passenger movements at the airport. The temporary pavilions will not be able to handle the volume of passengers, thus the importance of moving the operations into the terminal.
Currently, the temporary pavilions seat 325 passengers, while the transfer into the ground floor will see the seating capacity for passengers increase significantly to 800-1000 seats. There will also be additional check-in counters and a more efficient security-controlled operation.

“Building a new terminal complex is a massive undertaking, but the result will be well worth all the effort. The airport has grown into an ever-evolving hub airport and there is an urgent need for a terminal building that meets the safety standards of powerful hurricanes like Irma. The period of rebuilding will allow Princess Juliana International Airport to be better equipped to face the future,” stated the management duo on Tuesday.

The existing terminal building will be 12 years old on November 10. The airport is also set to celebrate its 75th anniversary on December 3.