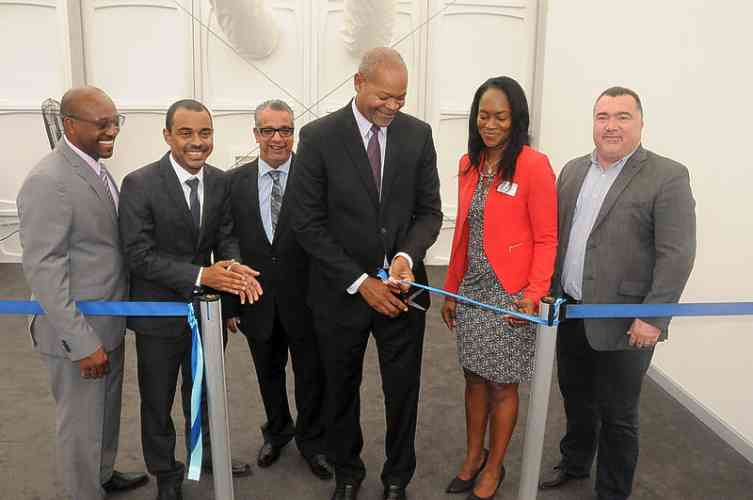 AIRPORT–Princess Juliana International Airport SXM officially inaugurated one of its air-conditioned tents intended to better accommodate passengers and other users of the facility temporarily, until the Terminal Building can be restored to its pre-Hurricane Irma state. Acting Minister of Tourism Cornelius de Weever was present at the symbolic ribbon-cutting creamy revealing the tent to the public on Friday morning.

Airport management and supervisory board members welcomed guests at the event. With the first phase, the departure tent, completed, the erection of the arrival tent will begin next week.

The pavilions will enhance customer comfort and upgrade the current operations for both the Arrival and Departure areas, thus freeing up the General Aviation (FBO) building that was being used for arriving passengers. The tents are customised to include offices and bathroom facilities.

Airport Chief Financial Officer (CFO) Ravi Daryanani said in his address, “September 6, 2017, is a date that will be etched in our minds for many years to come. The island of St. Maarten took a direct hit by the largest hurricane in history, Hurricane Irma, that crippled our community and businesses.

“Immediately after the storm, the country was placed on a mandatory curfew, the Dutch military took control of the Airport to administer evacuation flights, and there were limited supplies and repair materials on the island. Recovery efforts were also disrupted by the threat of Hurricane José and the torrential rainfall from Hurricane Maria. Like many, Princess Juliana International Airport was down, but we were not out.”

He added that despite the many challenges, the Airport’s management and staff had persevered by addressing the safety and security measures needed to obtain Civil Aviation’s approval to re-open operations. This happened in 34 days.
Although it seemed like an eternity at the time, re-opening the airport in such a short time-frame is a monumental achievement for which we should applaud the dedication and hard work demonstrated by Chief Operations Officer Michel Hyman, all the employees, and third parties who made this happen, he said.

“It’s not as simple as just opening our doors for business. But we also understand what our Airport represents. It is not only a critical part of the strategic infrastructure of the island, it is also a symbol of our progress. The Airport started as a small airfield back in the 1940s and developed over time into an award-winning international airport and the second largest hub in the region. The people of St. Maarten are proud of this facility, because it stands as testament to our aspirations as a nation.

“Hurricane Irma, while devastating, is only a bump in our road to an even bigger and brighter future. We have started our comeback, and where we are today, dedicating these temporary facilities that will accommodate visitors and residents, is because of a team effort,” said Daryanani.

“With this facility, we strive for operational effectiveness, while simultaneously providing our passengers with an enhanced experience. In a few weeks, the Princess Juliana International Airport will also install a new temporary arrival pavilion. These two pavilions will serve to represent the SXM destination while we work on bringing back our pride and joy, the Princess Juliana International Terminal Building,” stated the CFO.

Minister de Weever said he was impressed with the works and looks forward to visitors coming back to the island and making their experience coming through the airport memorable.