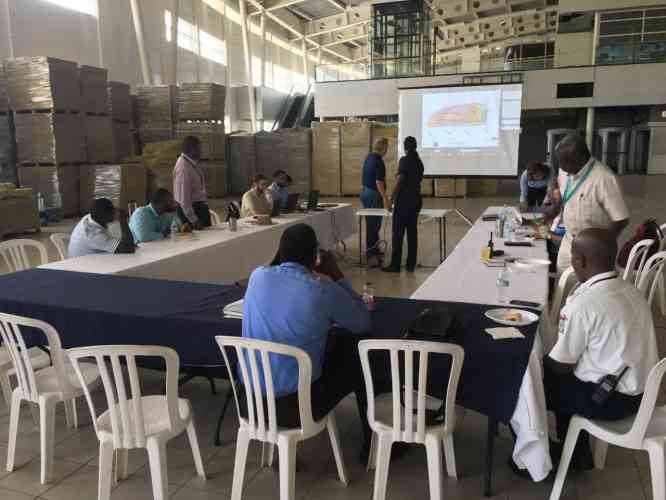 The start of the Princess Juliana International Airport Phase 2 workshop on Monday.

AIRPORT–The Princess Juliana International Airport (PJIA) Managing Board announced that during a week-long workshop they will be sharing with an internal core team the US $100-million restoration plan to transform the hurricane-damaged terminal building into a modern 21st-century airport.

The workshop started on Monday and information will be shared during the workshop dubbed “Package 2 operations”. The workshop kicked off at the former check-in area of the terminal building. The airport is currently being operated from the “Package One” temporary operations on the ground level.

The record investment is scheduled to get underway on receipt of the funding by both the World Bank via a grant and the European Investment Bank (EIB) via a loan agreement. The workshop curriculum entails updates on the mould remediation process, an interior and exterior design scope, project review summary, and project schedule and specifications review.

The initiative supports the reconstruction of the PJIA passenger terminal facilities to restore the airport’s function and to improve its resilience to future hurricanes. The planned works will include, amongst other things, replacement of the passenger boarding bridges, entrance doors, partitions, counters, electrical and IT systems, baggage handling system, and security installations. The new passenger facilities will feature state-of-the-art technological improvements and security enhancements.

“What we have done is put together two teams, which include internal employees, engineers which encompasses the Corgan company, which was contracted to design and lead the architectural works of the project,” said PJIA Chief Executive Officer (CEO) Brian Mingo. “This historic investment to modernise the airport will not only ease travel through this major hub, but it will ensure our airport joins the ranks as one of the major terminals in the world.

“All administrative and design documents are in place to move full force ahead with this extensive process and we can finally start the reconstruction in the last quarter of the year. It took a while because of the administrative procedures, funding, and arbitration proceedings with the insurance company. It has been an uphill battle, but we are proud to say we have reached this point of today’s kick-off milestone and we are moving full speed ahead.”

“It’s a great intake at this point to see that we are finalising the project’s design, whereby we will have the drawings upgraded from 90 to 100 per cent completion,” added Chief Operations Officer (COO) Michel Hyman. “I think this is the phase that we are anxiously looking forward to and I’m particularly elated to arrive at this milestone with our team and the Corgan company as well.

“This latest plan for the modernisation of the airport will build upon our efforts to improve this world-class facility and enhance the traveller experience, following the

The project further includes the remaining mould remediation and cleaning process of the passenger terminal, which was also executed prior to the “Package 1 Temporary Operations”, before moving back operations from the temporary Arrivals and Departure pavilions into the ground floor of the terminal building on December 14, 2018.