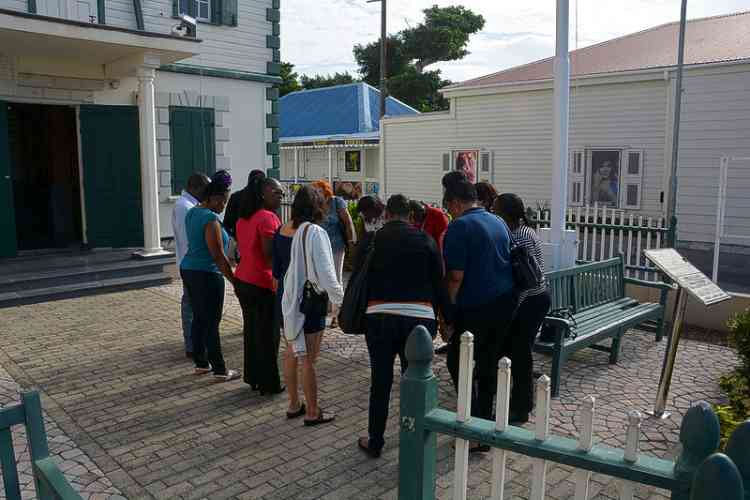 PHILIPSBURG–Nine former employees of Princess Juliana International Airport (PJIA) contested their dismissal in summary proceedings in the Court of First Instance on Friday.

Sixteen airport workers were caught on camera stealing merchandise from the Penha store in the Airport Terminal Building on October 15 and 16, PJIA management claims.

According to PJIA, the employees confessed to management when confronted with the allegations after the store owner filed a complaint.

In front of the Judge on Friday, however, the nine employees denied they had ever confessed to the allegations. The workers claimed that they had heard that a Penha employee had given them permission to take damaged and wet merchandise after Penha had largely emptied the store, but none of the workers admitted to the Judge they had gone upstairs to do so.

Attorney Cindy Marica pleaded with the Court to declare her clients’ dismissal illegal and to order the continuation of remunerations.

She claimed that her clients’ dismissal was unfounded and illegal, as it was based on the alleged theft of items from the Penha store, which, she said, was not properly investigated.

According to PJIA’s lawyer, the Prosecutor’s Office did not allow the Airport to show the camera footage, as this was considered criminal evidence.

Marica pleaded with the Court to declare her clients’ dismissal null and void and to award damages. She said her clients were “openly discriminated,” as co-workers who had returned stolen items had retained their jobs.

She said her clients, many of whom had “impeccable” records of 20 or more years of service to the Airport, had not been treated fairly.

Attorney Jansen contested the discrimination claims. “Different cases lead to different decisions, among which withdrawal of dismissal,” she said.

She stated that the Airport had acted diligently and meticulously in investigating the allegations of theft and in deciding to lay off unrepentant workers.

Jansen said that all but two employees had confessed to having stolen perfumes during working hours at a cordoned-off section of the Airport.

She said Penha had never given permission to take away items, “and even if they had permission this is in contravention with the stipulations in the employees’ handbook.”

Jansen said the Airport had to give out a signal, also to its partners, that such behaviour would not be tolerated, especially not from its security personnel. The Airport refuted statements that representatives of ABVO labour union were not properly informed of procedures.

All nine Airport employees were given the opportunity to give a statement to the Judge, who also posed questions. Emotions flared high at times, as two workers burst into tears.

One of them even required medical attention from ambulance workers outside the Courtroom for some time.

“We’re not thieves,” she had told the Judge minutes before she collapsed, overwhelmed by emotions. “I’m not getting another job at my age. I love my job. I love what I do,” she said before breaking down.

One of her colleagues informed the Court of her financial situation. “I have no other income. I’m a hardworking lady. It’s not fair to take bread out of my mouth. I came to the Airport to clean. It was not my intention to steal. I work without a record for 28 years,” she said.

Both lawyers are to submit a second round of written pleadings, in which they are to respond to each other’s arguments, next week Friday, March 16.

The Judge will present his decision Friday, April 6.