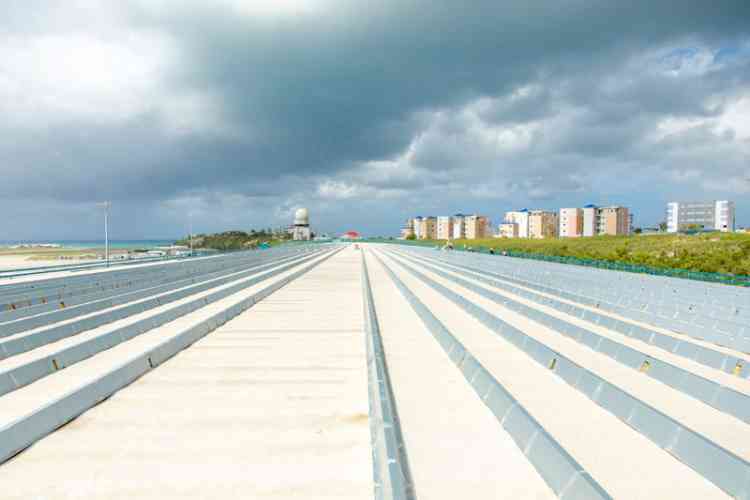 The omega profiles installation on the roof of the terminal building.

AIRPORT–The reconstruction of Princess Juliana International Airport (PJIA) has now officially commenced. Both projects are part of Package One – Temporary Operations, according to the airport managing board on Monday.

Airport facilities sustained severe damage at the hands of Hurricanes Irma and Maria in September 2017. Commercial operations were restored on October 10, a little over a month after the storms forced the closure of the facilities. The radar and automation system of the Air Traffic Control (ATC) tower were also damaged and are expected to be fully operational again before the start of the high traffic season.

Commodore N.V. was awarded the reconstruction contract after the procedural procurement process was completed. The construction company will only be responsible for completing the build-out for Package One – Temporary Operations, which consists of partial works on the ground floor of the terminal building.

Specifically, this will include the build-out of temporary check-in counters, immigration and emigration booths, offices, installation of security equipment, closed-circuit TV (CCTV) and reinstating the inbound/outbound baggage conveyor belts.

Project Manager Rob Normaan said, “The contract also calls for the installation of the air-conditioning systems, sprinkler and fire alarm system, reception area, IT [information technology – Ed.] systems, seating and provisions for the retail and food- and beverage-related concessions.”

According to the PJIA managing board – Chief Financial Officer and Acting Chief Executive Officer Ravi Daryanani and Chief Operations Officer Michel Hyman – the updated timeline for the completion of the Package One – Temporary Operations project is now December 2018.

After the temporary operations become fully functional in the terminal building, the arrival and departure pavilions will be dismantled. The completion of the project is expected to coincide with the beginning of the high tourist season.

Omega profiles were seen being hoisted onto the roof of the terminal building weeks ahead of the installation. The omega profiles are the frames on which the roof panels will be installed.