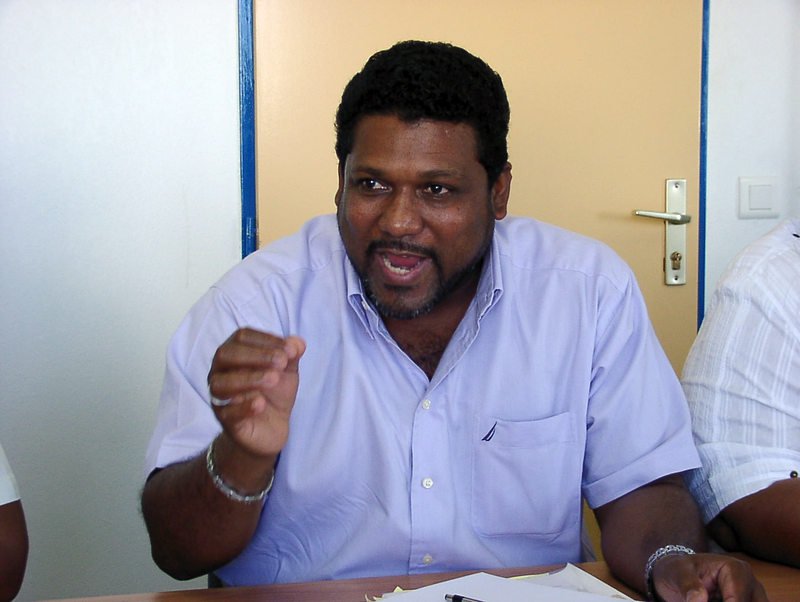 MARIGOT–Former President of the Collectivité Alain Richardson has emphasised how important the next Territorial Elections in 2017 will be for the future of the territory and its citizens, and warned of “chameleon-like” candidates with the gift of the gab, who appear to be in line with French national party policies, but in reality are far from defending St. Martin’s specific interests within the French Republic.

“The same goes for those who are seeing the next Territorial Elections as a springboard to their ambition of a national political career (even if they swear to the contrary),” Richardson said in a press release.

He noted one of the peculiarities of St. Martin, compared to France, is that, just like Mayotte and French Guiana, they are the only ones within the French Republic to manage primarily a young and permanently growing population.

“This situation, under “normal circumstances”, is a tremendous asset and the sign of dynamism, development and growth potential permitting the territory to look at the future with a certain serenity. However, for decades now we are no longer in a “normal situation”; challenges, battles, threats and fears prevail in St. Martin.”

He rolled out statistics to show just how challenging the situation is in St. Martin.   Nearly 40 per cent of the population is less than 20 years old; the annual rate of population growth +3.2 per cent (France +0.55%); some 11,000 children enrolled in schools, colleges and high schools in the territory; St. Martin has one of the highest rates of school failure for leaving school without training or diploma; approximately 25 per cent of the prison population in Guadeloupe comes from St. Martin.

“A large young population, high rate of population growth, record school failure and unemployment rates, a gross domestic product per capita that has remained unchanged since 1999 (same over the last 18 years). This is an explosive mixture. This is the picture. This is the reality. These are the main elements of a time bomb,” Richardson stressed.

“Let’s be very clear, as it has been for more than three years now, we cannot expect anything significant in terms of projects and policies from those who are governing us presently to resolve and/or address these threats and challenges. For even with a clear and detailed road map and restored finances, those in charge have failed in remaining faithful to their political commitments.

“The challenges of the next territorial election are thus to transform threats, dangers and current challenges into opportunities, and fears in confidence, envy and energy capable of stimulating wealth creation and economic growth. Taking into account the facts and issues, we have no choice but to implement a holistic society and societal project destined to enhance, empower, educate and train our youth, so that they may become the best asset for the future of our territory. We need to re-define our model of society with its founding values.

“Over the next 10 years, we need to at least double the level of the gross domestic product of our territory: create wealth. I would state that only the private sector creates real wealth! The corporate and business world must be the preferred partner of our government and this world must show solidarity with our youth and society as a whole. These are two of the priorities for St. Martin. These are mine! There are many others, but these are the basis for a better future.

“To complete this mission for the benefit of all, St. Martin will need honest men and women with goodwill who can go beyond old divisions and bury the war axes. I am totally committed and resolutely engaged in this logic and this is why I am not in such a hurry as others, despite pressure to declare my candidacy. St. Martin and our collective interests are by far more important and bigger than my possible ambitions.

“But, let’s be clear, the success of such a project will require a strong, competent, resolute and combative leader, as well as a competent and cohesive team; to defend and assert our territory’s own interests against the State and Central Administration of France,  defend by all means necessary the financial rights of St. Martin against the State (for a fair and honest compensation of the transfer of competences in accordance with the constitutional principles – a Marshall plan to finance the infrastructural deficit of our territory – full repayment of the sums collected by France that need be returned to St. Martin).

“To obtain the right to adapt and amend all the legislation necessary to ensure the competitiveness and attractiveness of our territory in order to achieve the above mentioned priorities; have all essential State institutions and services (Inspection Académique, Institution for Higher Education and Learning, RSMA, school of second chance, etc.) installed on our territory.”