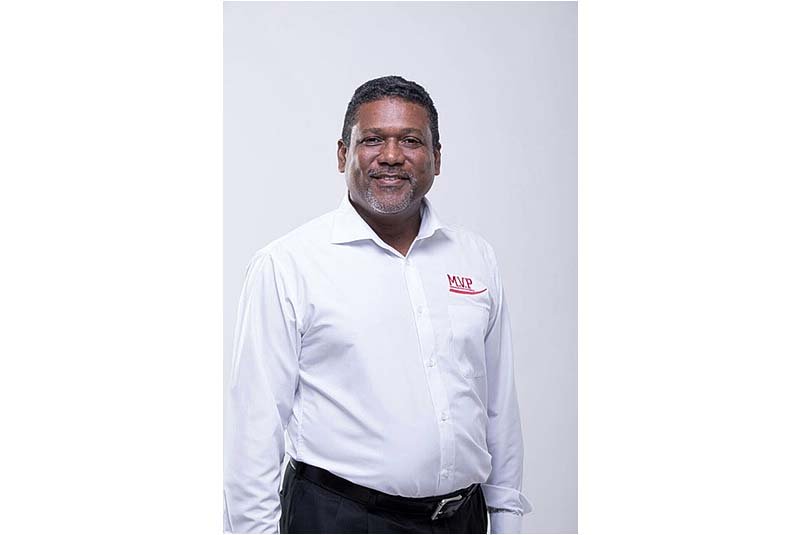 MARIGOT–Former Territorial Council President and leader of “Marche vers le Progrès,” Alain Richardson, has written to President of the French Republic Emmanuel Macron to make him and his ministries aware of the importance of reconstructing St. Martin in the right way, in the context of rebuilding to withstand more powerful hurricanes and not to repeat the mistakes of the past.

“I wanted to make sure a certain amount of elements are taken into consideration in the whole process of reflection and the letter is based on my observations from day one after the storm,” he said. “A rebuilding plan must take into account the reality of the territory in order to have a comprehensive but effective plan.

“The first observation immediately after Irma passed was that command structures like the Préfecture, Hotel de la Collectivité, were knocked out very early. You had no operational command base for a while or knew where it was moved to. Even the shelters, some of them had to be closed down and new ones found. It was total chaos in terms of immediate response.

“Secondly, all communication – phone, internet, radio, television, went out and that was a frightening situation particularly as José was threatening and then with the arrival of Maria; that, on top of no water and no electricity. No information really got out to the population in an efficient way to help them prepare.

“We must have a secure operational command structure and a reflection on a more secure shelter system, not the one we use presently with churches and schools. Water and electricity production was damaged. After Hurricane Luis it was said utility networks would be put under ground yet 22 years later with Irma, water and electricity were disrupted and we were no better off. Having all those poles and cables fallen down on the streets tells you there must be a well-financed plan to put it all underground.

“The third observation was the badly damaged hospital and medical system. Pharmacies and health care services were all impacted by the hurricanes. Hundreds of patients had to be airlifted from the hospital to Guadeloupe. It was quite a while before doctors and pharmacies were working again. All of this must be taken into account when reconstructing and looking to the future.”

Richardson noted as a consequence of the hurricanes there was an exodus from the territory of some eight to 10,000 inhabitants.

“My estimation is that St. Martin lost a third of its population. Who were they? Among them were civil servants and teachers. We are nowhere near getting all those teachers back, and from about 60 State civil servants there are only 25 left. Most of them were not grounded in the territory, meaning they came from France, Guadeloupe etc.

“That tells you that they do not really have the interest of the island at heart and in my view in the future we must have people that have attachment to the island, either by property, family or other connections that gives more incentive to stay; and most of those civil servants don’t come here out of free will. They are posted here.

He said there must be an international fund created to come to the rescue of the Caribbean after these disasters. The port must have the capacity to receive ships with sufficient draft. He noted the military had to verify the depth of the water before certain ships could come in and valuable time was lost because of that. Princess Juliana Airport on the Dutch side was still closed.

“We must have a deep water harbour that on a normal basis can accommodate ships in an emergency.”

Another observation was the very long lines at the post offices, Global Transfer or Western Union with people sending money off island to families, when that money could be spent more effectively in the local economy. Funds coming in from aid should be channelled into the local economy, he suggested.

On immigration control, he has recommended that the current Carte de Séjour issued to foreigners should not restrict them only to St. Martin, but to give them the possibility to live and work elsewhere in the French Republic.

“A lot of these people want to leave after a situation like this. With such severe damage you can’t fence them in. It will take off part of the burden locally on immigration because if they are unemployed they are also continuing to draw social benefits. It was already a bad situation before but worse after Irma.”

He continued:  “With no revenues coming in from taxes, 2018 will be a blank fiscal year; part of 2019 will be the same. The institutions of the Collectivité combined employ about 1,400 workers and there is an opportunity there to send those workers on training courses or internships with other Collectivités of the Republic for three months to three years.

“Ideally the State or the other Collectivités would pay the expenses. This again would take a great burden off the Collectivité; and when those workers come back fully trained we will have a much stronger and effective administration.

“We’ve always had the problem of not having enough qualified category A or B workers in the administration. This is an opportunity to build that apparatus. At the same time you are reducing a chunk of the payroll burden on the Collectivité.”

Another recommendation is for a Collectivité institution to purchase land or property that has come up for sale after people have left the island; damaged properties such as “defiscalized” hotels and apartments can be re-orientated into new construction for a new economic development plan rather than let those properties continue to decay. Private persons should also be able to re-enter the housing market. Not all funding should go into social housing.

Richardson also insisted in his letter on having the adapted military regiment of Guadeloupe RSMA for young people set up in St. Martin. RSMA with its training programmes for the unemployed or without school diplomas can provide skilled persons for reconstruction in a short amount of time.