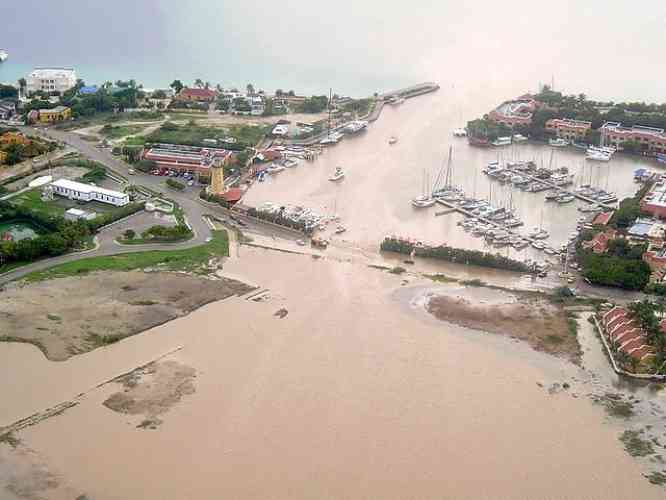 Due to deforestation and overgrazing by cattle, the soil can no longer be held by vegetation and erosion occurs. Rainwater and wind ensure that the soil ends up in the ocean, which together with untreated waste water pose a major threat to coral reefs. (Public Entity Bonaire/Directorate Spatial Development photo)

SABA/ST. EUSTATIUS–Wageningen University in the Netherlands recently published an alarming report on the threatened natural resources in Bonaire, Saba and St. Eustatius. Dutch Caribbean Nature Alliance (DCNA), together with local park organizations, urge the islands and the Dutch government to take measures to save nature above and below water.

Loss of nature has far-reaching negative consequences for the local population since nature serves as one of the most important sources of income, and offers protection against extreme weather conditions, DCNA said.

Wageningen University recently published an alarming report, commissioned by the Ministry of Agriculture, Nature and Food Quality, on the state of nature in the Caribbean Netherlands.

The 33 experts who worked on this report concluded that the current state of biodiversity in the Caribbean Netherlands must be assessed as “moderately unfavourable to very unfavourable. This applies to both the habitats and the dependent species and/or species groups.

“This contrasts strongly with the image for the European Union and the European Netherlands, where governments have been structurally investing in nature policy and management for decades,” it is stated in the report.

There are many threats identified, the biggest threats being cattle, invasive exotic species, climate change and overfishing. “In addition, coastal development, erosion and eutrophication by waste water should not be forgotten. Because the threats are not sufficiently addressed, the scientists view the future perspective as moderately unfavourable to very unfavourable,”  the Wageningen scientists said.

The deterioration of the local environmental conditions has, in addition to negative consequences for the number of plant and animal species, major economic consequences.

Habitats such as coral reefs, mangrove forests, seagrass fields, tropical mist and rain forests and caves serve as important tourist attractions. Less nature means fewer tourists, resulting in a decrease in employment and income. In addition, the loss of coral reefs, mangroves and deforestation will provide less (coastal) protection in extreme weather conditions. Examples of this were seen after Hurricanes Irma and Maria, which caused major damage in the Windward Islands in 2017.

For the largest threats, it is deemed critical to immediately tackle the issue of overgrazing caused by free-roaming cattle and to improve waste- and wastewater-treatment systems. In addition, there is a need for improved monitoring mechanisms to better understand the current state of the environment and evaluate its management.

It is also deemed important to improve the resilience of ecosystems so that these are better able to withstand the effects of climate change, such as warmer and acidic seawater which causes coral bleaching, and extreme weather conditions, such as longer periods of drought and more powerful hurricanes.

Other important management considerations include implementing coastal protection through spatial planning and reduction of erosion through reforestation with indigenous trees and shrubs.

DCNA said it agrees with the conclusions of the Wageningen research and recommends that all involved governments sit down with (local) experts to work together to find integrated solutions to help reverse these trends.

The same applies to the other DCNA members, such as Parke Nacional Arikok in Aruba, Caribbean Research and Management of Biodiversity CARMABI in Curaçao and St. Maarten Nature Foundation.

“For all islands, investing in nature and the environment is not a luxury, but a crucial investment in the future,” stated DCNA.