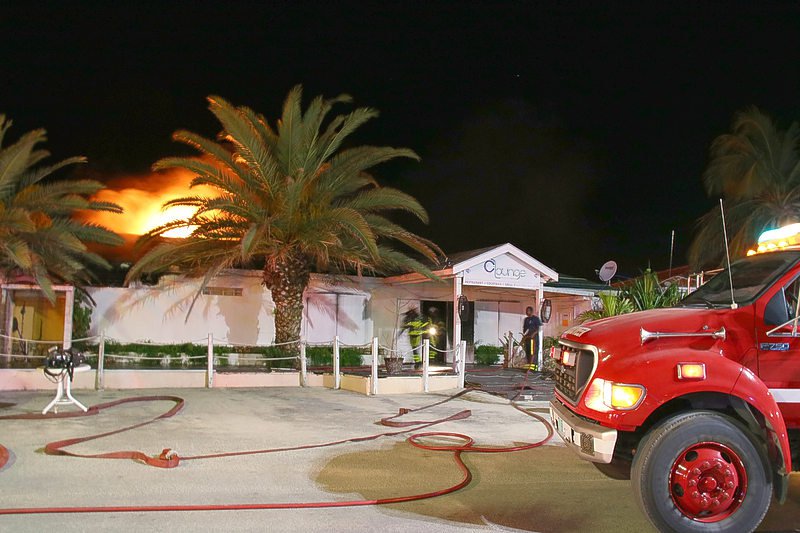 BEACON HILL–Alegría Real Estate B.V. has lost an injunction filed in its bid to force out Jimy’s N.V., the operators of C-Lounge and Thai Smile restaurants at the former Caravanserai Beach Resort in Beacon Hill.

Alegría wants to turn the former Caravanserai into a premium hotel and sought Jimy’s eviction, as it failed to pay rent and had also not repaired the two restaurants, which were severely damaged by fire on April 3. The restaurants had been closed from June 2015 until November 2015.

Based on Fire Department and insurance-expert reports, Alegría declared the rental agreement terminated because the premises on which C-Lounge and Thai Smile were located were damaged beyond repair.

Jimy’s rented the two commercial units against payment of a monthly rent of US $3,000, as well as payment of a maintenance fee to a maximum of 15 per cent of the rent for parking facilities, (garden) maintenance, waste disposal and a septic tank.

The rental agreement was unilaterally terminated on April 15, and Jimy’s was ordered to vacate the premises by May 15, at the latest. However, Jimy’s did not heed this request.
Parties squared off in Court over this issue in several proceedings, among which is also a court case on the merits (bodemprocedure).

According to Alegría, rebuilding the rented buildings would be “irresponsible” due to the high cost involved. Besides, Jimy’s “structurally” failed to pay rent during eight consecutive months, leading to a debt of some US $48,690 since November 2015, the owners claimed.
The developer was represented in these proceedings by Director Salem Fahdi, Niek van der Ree of Pream Architects, and attorney-at-law Susanne Pendjol-Klarenbeek.

By contrast, Jimy’s lawyer Willem Nelissen claimed that Alegría wants to get rid of the rental agreement to get its hands free to redesign the resort with a different casino and catering facilities.

“For that reason, defects, and this time also the fire damage, are not being repaired. That is the actual problem which is at the base of the disputes concerning the rent arrears,” according to Jimy’s.

Alegría called upon the Court to convict Jimy’s of payment of US $48,690 in arrears, which included rent payments, maintenance fees, and utility bills.

The rent arrears are also contested in the main court case, but, as the Court ascertained, the months following the fire were included in the resort’s calculation of arrears. However, “it is obvious that Jimy’s can no longer make use of the rented properties,” the Court stated.

Against this light, the judge did not find the resort’s interests pressing enough to make an immediate decision. The Court also found Alegría’s request insufficiently substantiated. Therefore, Alegría lost the injunction and was ordered to pay the cost of the legal proceedings, which were estimated at NAf. 1,000.
Source: Daily Herald
Alegría loses bid to force Jimy’s N.V. off premises