Home The Daily Herald All good news at State of the Industry St. Maarten event |... 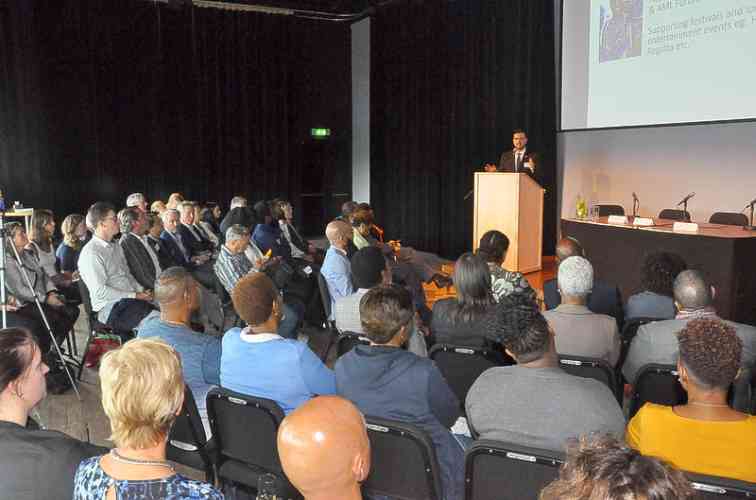 More than 80 persons attended the State of the Industry event hosted by the tourist offices of St. Maarten and St. Martin in Amsterdam on Friday where Minister Stuart Johnson was one of the main speakers. (Suzanne Koelega photo)

AMSTERDAM–A return of the direct Royal Dutch Airlines KLM flight on the Amsterdam-St. Maarten route, the home-porting of Seaborne luxury cruise vessel, the re-opening of hotels on St. Maarten/St. Martin and a strong combined presence of St. Maarten, St. Martin, St. Eustatius and Saba at the Dutch Holiday Fair.

The St. Maarten Tourist Bureau for the Netherlands, Belgium and Luxembourg AVIAREPS organised the presentation for the media and the stakeholders in the Netherlands during which an update was provided about the state of St. Maarten/St. Martin tourism sector and the promotion of the entire island as one destination.

Using a power-point presentation with attractive photos, Minister Johnson, St. Maarten Tourism Director May-Ling Chun and representative in Paris of the St. Martin Tourist Office Olivier Louis, in combination with live connections with the Rainforest Adventures in St. Maarten and Fort Louis in St. Martin, the audience was convinced that the island was bouncing back from last year’s hurricanes and that there were many positive developments.

Just before Friday’s event in Amsterdam, the St. Maarten delegation had a meeting with high-ranking KLM officials. KLM confirmed that it had St. Maarten on the radar to restart the direct Amsterdam-St. Maarten-Amsterdam flights by November 2019.

Expressing his gratitude for KLM’s continued support, despite the low load factors after Hurricane Irma, Minister Johnson said that this was very good news for the island, also in terms of promoting the destination in Europe.

Currently, KLM’s return flight from St. Maarten to Amsterdam goes via Curaçao, while only about 40 per cent of the seats on board are available for St. Maarten passengers. The minister told The Daily Herald that he also asked KLM to consider bringing down the price of tickets to St. Maarten to the same low tariff for Aruba and Curaçao, an idea that the officials were receptive to.

KLM is putting in extra flights for next year’s St. Maarten Carnival and the Heineken Regatta. Johnson said KLM was also willing to consider introducing a special ticket price for St. Maarten students. The minister said the meeting was “extremely positive.” “It confirms KLM’s commitment. They maintained airlift after the hurricane and are willing to keep investing in St. Maarten. We very much appreciate that.” Starting early November, KLM will be flying to St. Maarten three times a week.

Port of St. Maarten Business Development and Marketing Manager Alex Gumbs had some other good news to share at Friday’s event: the Seaborne high-end luxury cruise vessel will start home-porting in St. Maarten per December this year.

The 450 passengers will be boarding the Seaborne on St. Maarten for a cruise through the Caribbean every other week. St. Maarten will share the home-porting with Barbados for this ship. Gumbs pointed out the additional economic activities that home-porting brings to the island. Returning to the island this high season will be the luxury Windstar Cruises.

The audience at Friday’s event clapped when Gumbs mentioned that the port this week received its one millionth cruise passenger and the return of the 12 Metre Regatta in October, the first tour since the hurricane. “As a destination, we should be proud of how much we have achieved since the hurricane,” said Gumbs, who was also part of the St. Maarten delegation that attended this week’s Sea Trade Cruise Mediterranean in Lisbon, Portugal.

Minister Johnson started his presentation with the priorities that have been set to further develop St. Maarten’s tourism. Priorities include the developing of a 10-year Tourism Master Plan, the agreement with St. Martin to promote the island as one destination, and the strengthening of the relations with the hub partners.

In an effort to strengthen the ties with the hub partners, Johnson announced that visits will shortly take place to St. Barths, Antigua, St. Eustatius, the British Virgin Islands (BVI) and Dominica. Saba was already visited last month. As for the increased cooperation with St. Martin, Johnson said that the two sides would align their marketing efforts. “Together, as one destination, we are stronger.”

To give content to the increased cooperation with St. Martin, but also with St. Eustatius and Saba, St. Maarten will team up with these partners at the annual Holiday Fair (“Vakantiebeurs”) in Utrecht in January 2019. St. Maarten was not present this year at the fair’s highly popular Caribbean Village. St. Eustatius and Saba were present, and the absence of St. Maarten was very much felt. The St. Maarten Port, the Princess Juliana International Airport, several hotels and the St. Maarten Chamber of Commerce will be present at the upcoming Holiday Fair. “We are combining efforts and offering one product,” said Tourism Director Chun.

Minister Johnson provided an update on the airport, an essential component for the further development of tourism after Hurricane Irma. The audience was glad to hear the re-opening of phase 1 of the airport terminal mid-November, with a 1,200 passenger capacity at any given time. The re-opening of part of the terminal will also make it possible to accommodate more flights.

Director Chun said that 19 airlines were now operating at the airport, while several airlines, including American Airlines, JetBlue and KLM/Air France will be adding flights. As for the hotel rooms, Chun said that currently St. Maarten had a little under 2,000 hotel rooms and that by December this number would go up to 3,000. Some 165 restaurants are currently open and more are to follow.

Chun and Louis provided a list of the hotels that were currently operational on both sides, and those that were opening in the coming months and next year. Louis said that the French side currently had 400 rooms available, but that by December this year there would be 800 rooms with the reopening of a number of hotels.

It was a full house at Friday’s State of the Industry held at the IJ Music Hall on the Amstel River. Besides several (travel) media representatives and travel agents, there were many friends of St. Maarten and a number of St. Maarteners who wanted to hear first-hand how the island is doing. Also in attendance were St. Maarten Minister Plenipotentiary Jorien Wuite, Deputy Minister Plenipotentiary Michael Somersall and cabinet staff.