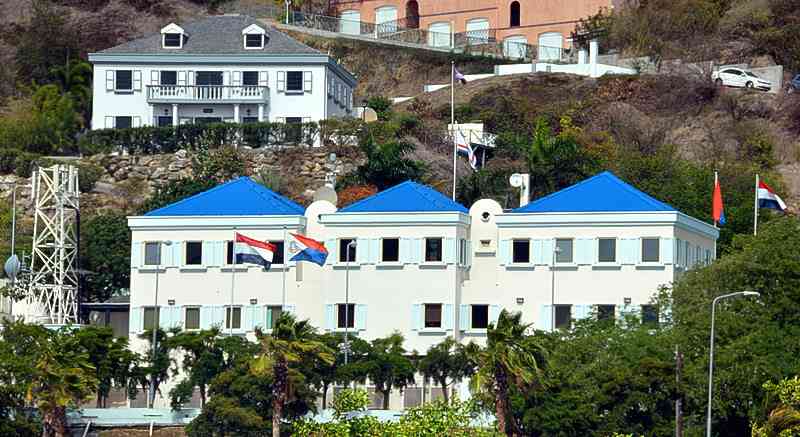 POND ISLAND–It has been just over a week since Parliament sent Public Health and Labour Minister Emil Lee to pack up his office following a no-confidence vote. However, to date there has been no official word from the United Democrats/St. Maarten Christian Party (SMCP) coalition about its plans to replace Lee.

Lee was sent home on July 2 when seven opposition Members of Parliament (MPs) voted together with coalition MP and motion presenter Luc Mercelina. The seven other coalition MPs voted to keep Lee, but fell one vote short.

The Leona Romeo-Marlin Cabinet, supported by the United Democrats/SMCP coalition, is now de facto without two full ministers. Lee has made his position available to Governor Eugene Holiday and is in essence a caretaker minister who is without the power to make any new decisions.

The second minister in a somewhat of a caretaker position is Public Housing and Infrastructure Minister Miklos Giterson. He made his position available to the governor mid-June as a result of pressure from the coalition. Giterson stopped short of resigning from his post, the move some in the coalition wanted him to make. He had been convicted several weeks previously for driving under the influence.

There has been no word officially about who the candidates may be to replace Lee and/or Giterson. People close to the issue have said that former United People’s (UP) party MPs Lloyd Richardson or retired police officer Johan “Janchi” Leonard may be frontrunners for at least some in the coalition.

Another issue regarding Lee is whether he will return to Parliament. He was one of the original seven United Democrats to be awarded a seat following the 2018 snap elections, but opted to continue on as a minister. Lee’s not taking up his seat made way for current United Democrats MP Tamara Leonard to enter Parliament. Leonard is not required to give up her post in Parliament for Lee to again become a member of the legislature.

In Giterson’s case, speculations are his replacement may come from within his own cabinet.

The fate of a third minister is also in question, as some coalition members have been calling for the resignation of Justice Minister Cornelius de Weever for what they deem too much concession to the Dutch Government.

De Weever, in his customary way, has stayed mum on the issue and has neither signalled his willingness to resign nor spoken out again the coalition’s wishes.

Ministers in St. Maarten are not elected. They are appointed by the governing coalition and are answerable to Parliament, which makes it possible for an adopted no-confidence vote to send a minister or ministers home.

With the seemingly quiet crisis facing the coalition spanning back all the way to March when United Democrats then-leader Theo Heyliger was suspended from Parliament on charges of corruption and money-laundering, there have been speculations that a shift may come in the make-up of the majority in Parliament.

The speculation of St. Maarten heading to the polls against has also been murmured about.

However, in both cases there has been no official move to either end the current coalition government or to call citizens to the polls less than two years after the last election.

There is concern in the community about the impact a severe governmental shake-up would have on the still fragile recovery and reconstruction of the country just about two years following the devastating wrath of Hurricane Irma.