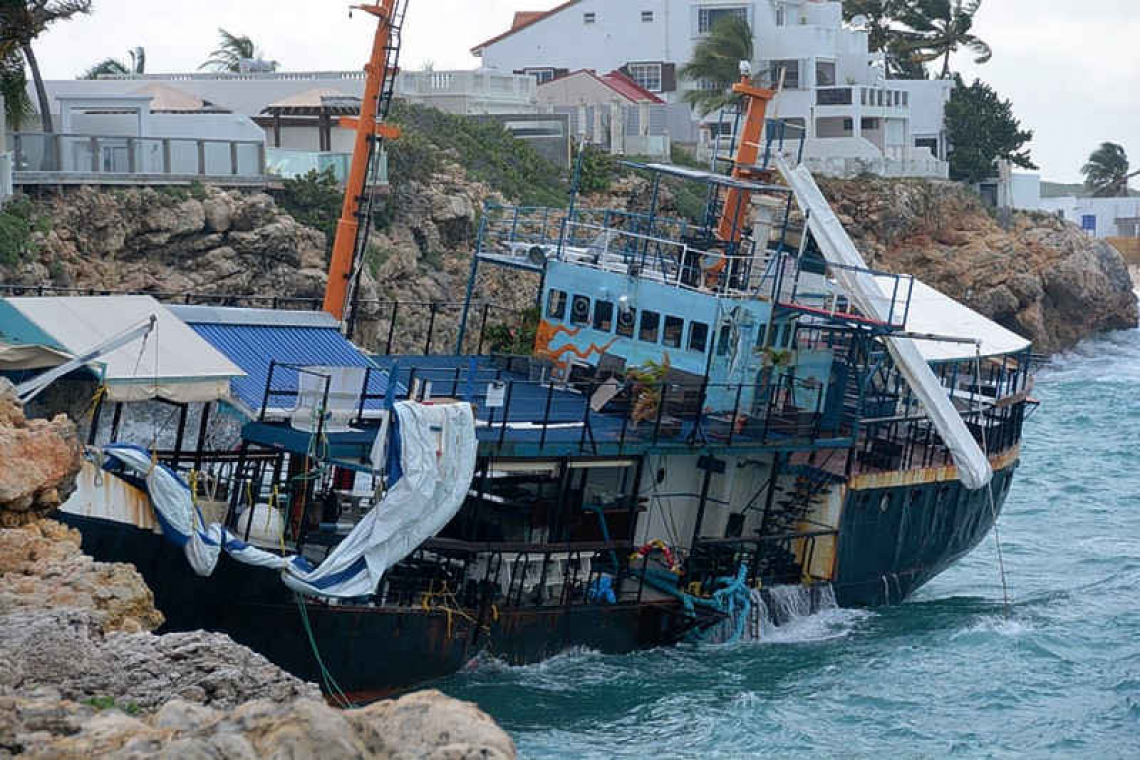 PHILIPSBURG–State Secretary for Home Affairs and Kingdom Relations Alexandra van Huffelen wrote to the President of the Dutch Parliament’s Second Chamber that with technical assistance from the Netherlands “all shipwrecks on St. Maarten have been cleared and the coastline cleaned up.” However, the wreck of former party boat D-Boat is still sitting on the rocks at Beacon Hill, posing a danger to residents during hurricane season.

The decommissioned, refurbished 1974 140-foot oil tanker known as D-Boat ran aground on the coast of Beacon Hill in January 2020. Two and a half years later, after three fruitless attempts by local entrepreneurs to pull the boat out to sea, the badly battered colossus squeaks and creaks against the rocks, near the balconies of seafront apartments.

The already completed Emergency Debris Management Project (EDMP) focused on clean-up of shipwrecks in Simpson Bay Lagoon and Mullet Pond, and removal of debris on the Simpson Bay shoreline. The removal of 139 shipwrecks was funded by the St. Maarten Recovery, Reconstruction and Resilience Trust Fund financed by the government of the Netherlands and managed by the World Bank.

The National Recovery Program Bureau (NRPB) website currently informs that of the total of $25 million, $22.2 million was disbursed.

NRPB sent out a press release on the completion of the shipwreck removal project on February 1, 2022. In total, contractors got rid of approximately 3,200 metric tons of ferrous (iron-based) scrap metal that was left to rust in these vital waterways, NRPB wrote.

“Additionally, the activity has successfully removed about 400 metric tons of non-ferrous scrap metal – such as zinc, copper and aluminium – as well as 66 40-foot containers full of other types of waste, such as wood, fibreglass and contaminated materials. All waste materials are now in the process of being exported abroad for environmentally friendly reuse or disposal.”

In response to previously asked questions, Minister of Public Housing, Spatial Planning, Environment and Infrastructure VROMI Egbert Doran (National Alliance) stated during the Council of Ministers press briefing on October 13, 2021, that NRPB would not assist in the removal of D-Boat. “Based on discussions with the NRPB it seems to be difficult to incorporate that with the current project that is taking place,” Doran said at the time.

He said that government “will have to seek financing to be able to execute that [the removal operation – Ed.]. And, as you know, finance is definitely a challenge. Nevertheless, it has our attention and I am looking forward to a solution as soon as possible.”

Doran acknowledged that the government of St. Maarten is responsible for removing the shipwreck, after The Daily Herald revealed in August 2021 that D-Boat has no owner.

The 2019 lease contract states that D-Boat belongs to Cumulus Capital Holdings Limited, a management company in Antigua. The name of this company has not been in the register of the Antigua and Barbuda Chamber of Commerce since September 17, 2015; the company had not existed for four years when a lease agreement was concluded.

Nevertheless, the government of St. Maarten granted permission to the alleged owner Jamie Nikanpour to transfer the former tanker from Simpson Bay Lagoon to Simpson Bay to be attached to permanent mooring near the bridge at the entrance to Simpson Bay Lagoon. The anchoring was done by a local company commissioned by Nikanpour, according to local entrepreneurs that had leased the tanker to operate it as a party boat and amusement park.

The anchor chain broke in January 2020, possibly due to undercurrents, and the boat went adrift, ending up on the rocks at Beacon Hill with a large hole in the hull.

Nikanpour ended the conversation immediately when he was called by The Daily Herald on a phone number in Antigua. An hour after the call, he changed his mind and answered the question sent to him via WhatsApp: “Hi, it’s not my boat so I don’t have much to say.”