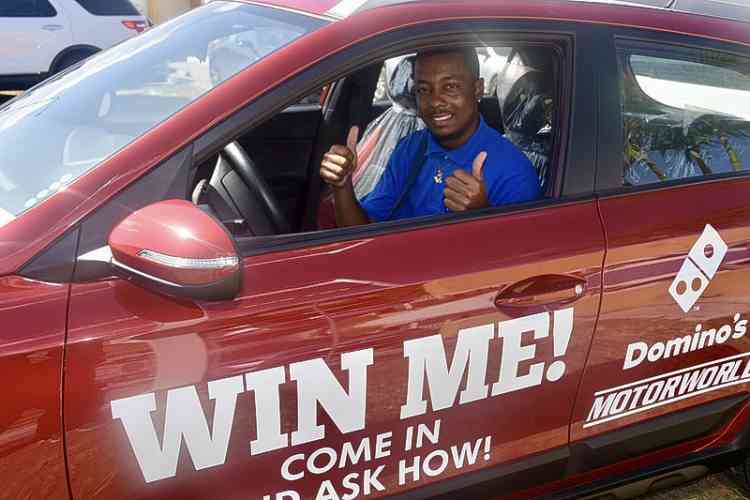 Allinton Augustine in his new car.

PHILIPSBURG–Allinton Augustine can now cruise the streets of St. Maarten in a brand-new Hyundai i20 Active after winning the vehicle in Domino’s 25th anniversary raffle which was drawn earlier this week.

All customers had to do to enter the raffle was include a 1.75-litre bottle of a Coca-Cola product with their pizza order for a free chance to win.

Augustine was elated when notified that he had won, and said, “Gratitude is the most beautiful way to say all that’s in your heart. It’s as simple as two words: ‘Thank you’. I would like to thank Domino’s, Motorworld, and CC1 for organising this wonderful raffle and for selecting my ticket as the proud new owner of this beautiful car.”

Domino’s franchisee John Caputo said Domino’s has always believed in giving back to the community.

“Most times it’s via community service, donations for worthy causes and helping out and feeding people wherever and however we can, like after [ Hurricane – Ed.] Irma. This time we are giving special thanks to our customers who have helped us reach this 25-year milestone. It’s certainly been a pleasure serving you our great pizzas and we look forward to continuing to do so for many more. Thank you,” Caputo said in a press release on Tuesday.

Domino’s also drew for two winners of free pizza for a year: Sandra Lake and Shaqeim Webster, and of an Xbox One S which was awarded to Camilla Morgan.

Motorworld and CC1/Coca-Cola had partnered on the promotion in recognition of the 25-year milestone of serving “St. Maarten’s favourite pizza,” it was stated in a press release.