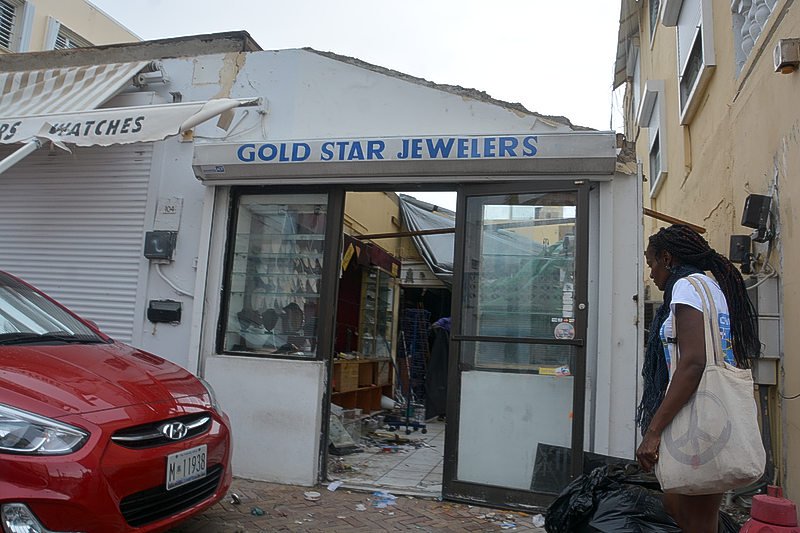 PHILIPSBURG–Almost seventy per cent of the Indian merchants operating on Front and Back Streets can and will reopen their doors provided there is sufficient security for the businesses and their customers, the Indian Merchants Association (IMA) said on Monday.
A number of businesses in the Philipsburg capital, predominantly occupied by Indian merchants, were affected by Hurricane Irma, which wrought havoc on the island on Wednesday, September 6.
“All businesses are eager to rebuild St. Maarten,” IMA said in an invited comment on the readiness of the businesses to welcome the first cruise vessel on November 11.
Currently, 80 to 90 per cent of the establishments on Back Street have reopened. Those that sustained major damage and/or were looted are in the process of rebuilding and recuperating. On Front Street, a little fewer than five percent of the stores have reopened. The remainder have either sustained some damage or were ransacked. There are also some stores that do not want to open as yet due to lack of security.
While many businesses sustained physical damage from the hurricane, the looting that followed was considered even more devastating.
“For many businesses, hotels, supermarkets and even homes, looting, ransacking, burglarising caused much more damage than Hurricane Irma,” the IMA said, noting that these activities have far-reaching consequences including job loss, revenue loss for Government, hike in insurance premiums and painting a negative image of the country, particularly because St. Maarten relies solely on tourism.
“The damage to the reputation and image of St. Maarten is incalculable. Bad news and negative images spread like wildfire on the Internet.”
IMA said that while it does not have any figures, the losses in the short and long term are estimated to run in the hundreds of millions of dollars.
“We pray and hope that a hurricane of such force never reaches our shores, but should we have to prepare if one does approach, lessons must be learned from Irma’s before-math and aftermath,” IMA said, noting that experienced persons who are able should be in the disaster management team.
IMA said its board and some newly-formed committees have had several meetings with merchants, the cruise lines and the National Recovery Team. In the most recent meeting business owners were updated on the upcoming cruise ship schedules and asked whether they can be ready to open doors for these visitors.
Asked what IMA’s primary concerns are currently as it relates to businesses reopening, the Association said safety and security are the most important aspects of any economy.
“The government must provide continuous security to all businesses everywhere. This is a fundamental responsibility of any elected government in the world,” the association said. “While we understand that the Government is cash-strapped and the budget is not balanced, even so, tax relief must be given to businesses, as it attracts reinvestments, saves jobs and jumpstarts the economy.
“Everyone, from the common man to the largest business, has been affected by the passing of Hurricane Irma. People have suffered massive amounts of damage to their homes and vehicles, businesses have suffered damage to their properties and from looting, etc.
“Not everyone is fully insured for their losses and the rebuilding is going to cost a lot of money. The burden of taxes is going to slow down the recovery. Government should lower all forms of taxes so that all entities (citizens, businesses, etc) on the island can allocate more financial resources towards the rebuilding.
“The sooner St. Maarten returns back as a prime destination in the Caribbean, the sooner Government will start seeing tax revenues increase and come back up to healthy levels. But for the short term, a serious and significant tax reduction must be implemented. All the most severely affected islands in the Caribbean have already implemented these reforms: Puerto Rico, St. Thomas, St. Croix, St. Barths and our very own French St. Martin,” IMA stressed.