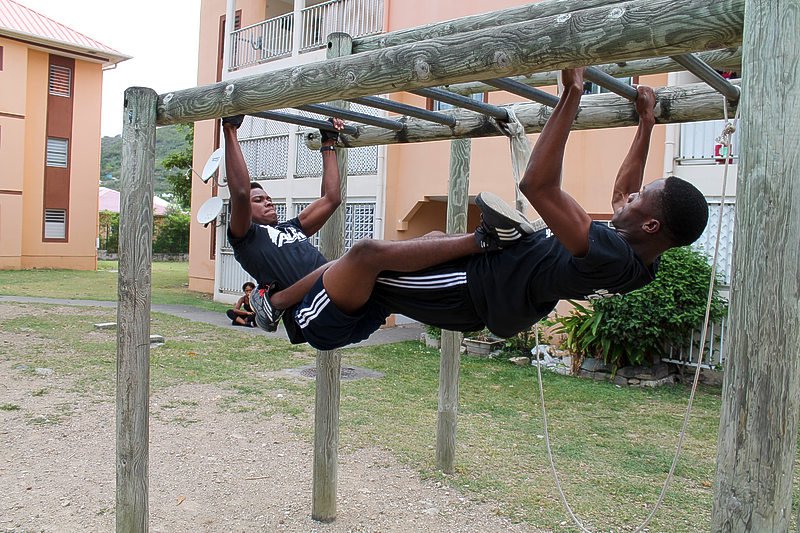 MARIGOT—In a quiet residential area in Concordia outside Residence Sucrière, a group of youngsters can be seen working out on structures that remind one of obstacles from an army assault course.

The obstacles have nothing to do with the army but more to do with structures that Semsamar installed as playgrounds for the residences. It just so happens this particular structure at Sucrière, all solid wood and metal bars, lends itself perfectly to a growing phenomenon called the street workout.

At first glance it looks like a bunch of guys and girls having fun with little else to do. Wrong; there’s a serious side to it.
Meet the Alpha team, a group of high school students, well spoken, and all physically toned and muscular. The team gives a demonstration of strength training, clambering over the structures at dazzling speed, executing pull-ups and getting into all sorts of contorted positions on the parallel bars.
Add to that the floor exercises; the push-ups and abdominal crunches. One long horizontal wooden pole is conveniently at the right height for triceps exercises.
“This is a free gym for everyone, or calisthenics to give it the proper name,” explains the group’s co-founder Gregory Sanchez. “It’s like going to the gym but you’re using only your bodyweight for the exercises, no machines, no weights. It’s very popular in the USA and we are the first to practice it here in St. Martin.”
Sanchez, along with three other co-founders Shakim Alvarade, Sylvester Carzel and Stanislas Casi, made a video which immediately had an impact on Facebook. More young people joined and now the group is up to 20 members, including girls.
The group meets three afternoons a week for training. Most, Sanchez notes, have a back ground in sports, typically basketball and running, so the fitness base was already there. The team was formed last year and was noticed by Jean-Marc Gervais, President of youth association Jeunesse Soualiga who was impressed by the group’s motivation and commitment.

“I was amazed that a group of youngsters could spontaneously meet up like that and do sport,” said Gervais. “I immediately sent a message of encouragement with the offer to help them expand and structure themselves. I invited them to join Jeunesse Soualiga so they are now part of the association’s sport section.”
That also led to the association helping them with materials such as T-shirts, gloves, and floor mats etc.
“Now we are raising funds to include them in the Guadeloupe selection for the street workout World Cup on August 6, 2016, to be held either in Dubai or Peking,” Gervais revealed.
“The sport is practised around the world but is fairly new in the Caribbean except Guadeloupe and Martinique have been doing it for a few years already. The Federation is based in Guadeloupe and works with French Guiana, Martinique and Puerto Rico, and now we have joined to put St. Martin on the map.”
Gervais would like to see the Sucrière work out being duplicated in other districts on the French side.
“The beauty of this sport is that you don’t need much infrastructure, whatever is at hand, using the natural environment or public facilities. What’s important for Jeunesse Soualiga is to keep the youth busy and this is a perfect example of a positive and healthy activity. It builds self-esteem, confidence and team work.”
As older members leave to pursue further studies or join the army, it will be important to train younger members which is already happening, Gervais notes.
The emergence of the street work out is not only another sport to offer young people but an effective weapon in the war against juvenile delinquency. 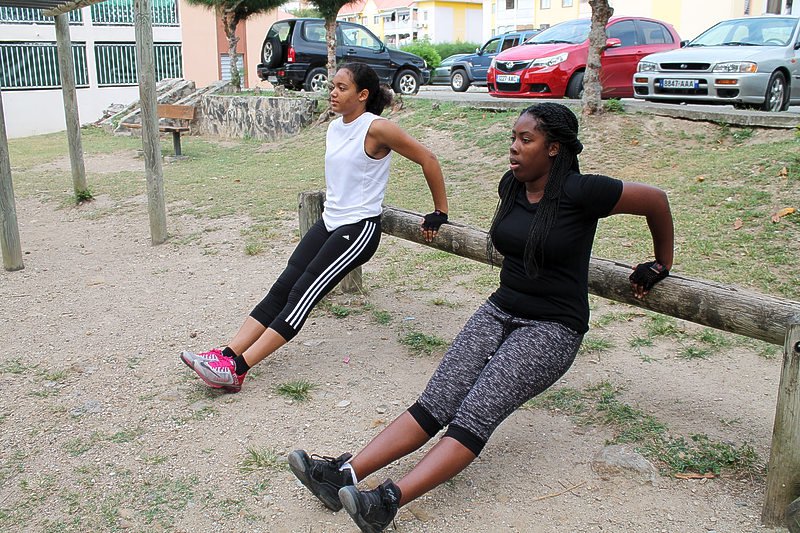