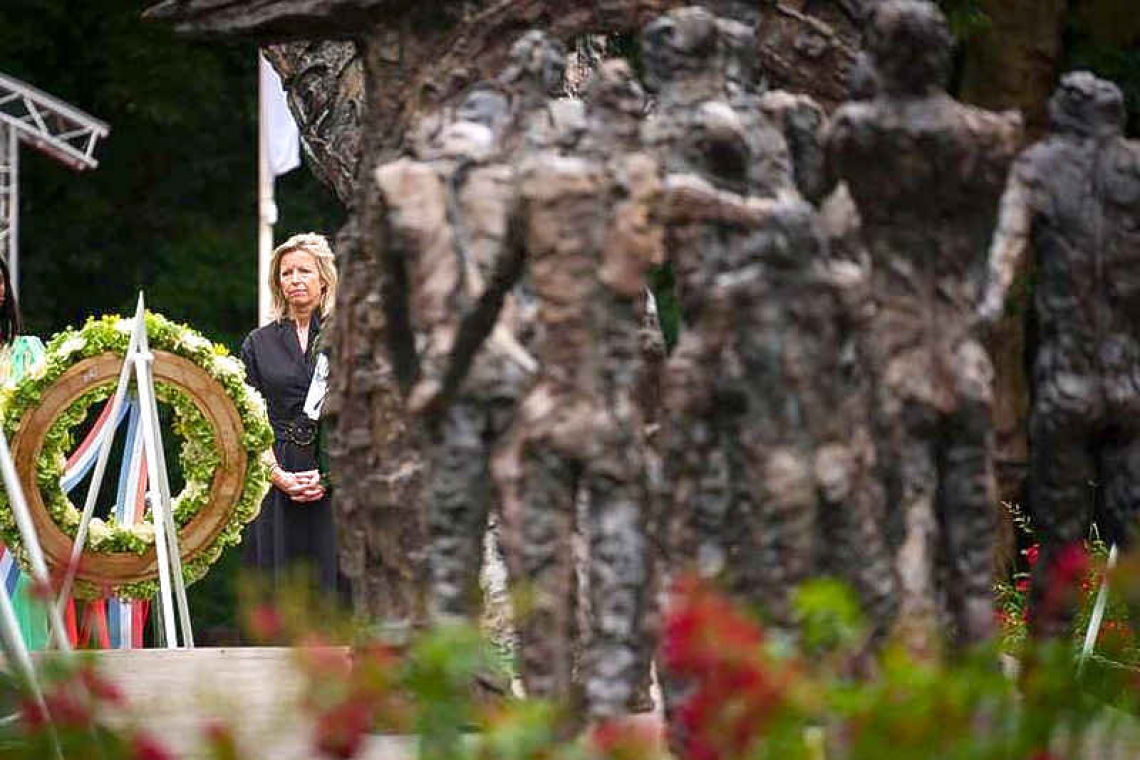 AMSTERDAM/THE HAGUE–Amsterdam Mayor Femke Halsema on Thursday, Emancipation Day, made formal apologies for the city’s role in the transatlantic slave trade. For the Dutch government a formal apology is a step too far, but caretaker Minister of Home Affairs and Kingdom Relations Kajsa Ollongren did acknowledge the pain and suffering that were caused to enslaved people.

Ollongren and Halsema were both speakers at the annual so-called Keti Koti (Break the chains) commemorative event in Amsterdam. The event was not open to the public due to the pandemic, but was broadcast live on national TV. Among the selected few invited guests was St. Maarten Minister Plenipotentiary Rene Violenus.

July 1 is the commemoration and celebration that the Netherlands officially abolished slavery in Suriname and the Netherlands Antilles in 1863, even though slavery did not really end until 1873, because people still had to work on the plantations for 10 more years.

“We can only look at the slavery past with repugnance, regret and shame. It is a past that we are all connected to, consciously or unconsciously, clearly or not clearly hidden in an unknown family history. It is not a sign of weakness to give accountability for that. This is how democracy shows its power. By acknowledging our past, we can change the future. That is not a luxury, but a necessity,” said Ollongren.

She spoke of the immense pain and suffering that was caused by slavery. “I realise that the pain that the irons caused has not disappeared, that the wounds have not healed as yet. It is a process that takes many generations. Philosopher Augustine wrote more than 1,600 years ago: “Hope has two beautiful daughters, anger and courage. Anger about the way things are and courage to believe that they won’t remain so.”

Prior to the national commemoration, she received from Committee Chairperson Dagmar Oudshoorn the final report of the Advisory Committee Dialogue Group on Slavery Past titled “Chains from the past”.

Along the lines of recognition, apologies and repairs, the Advisory Committee asked for attention and action. The Committee advised making the slavery past an integral part of the Dutch collective memory by, among other things, researching the role of the national government, through education, by setting up a national slavery museum and by establishing Emancipation Day as a formal commemoration day. The Committee also advised that the Dutch government make a formal apology.

Ollongren acknowledged the committee’s findings, but did not make a formal apology. “These pieces of advice are important and straightforward. We can’t ignore that. They relate to the urgency that I feel,” she said.

Amsterdam, Rotterdam and Utrecht already did historic research, she said. The Hague is planning to do the same. Aldermen of the four large cities also made a unified call for a national day to commemorate slavery past.

“By remembering, we can look ahead and connect to a society in which there is no place for racism and inequality. However, looking back means more than researching the past; it also means taking responsibility,” said Ollongren.

Mayor Halsema, on behalf of the City Council, offered apologies for the slavery past at Thursday’s commemoration. “For the active involvement of the Amsterdam City Council in the commercial system of colonial slavery and the international trade of enslaved people, I am offering apologies, on behalf of the mayor and the aldermen.”

Halsema noted that while no inhabitant of Amsterdam was to be personally blamed for the slavery past, the city had been involved in the slave trade on a large scale, and for a longer period. According to her, it is time to “incorporate the great injustice of the colonial slavery in the identity” of the Dutch capital “with a royal and unconditional recognition.”

Amsterdam is the first city in the Netherlands to make a formal apology. The other three large cities, Rotterdam, The Hague and Utrecht, are contemplating doing the same. British cities such as London and Liverpool, and US cities like Chicago, Illinois, and Charleston, South Carolina, already did so.

The city Amsterdam was one of the shareholders of the Suriname Society, a company that was engaged in the transatlantic slave trade. Amsterdam managed the colony Suriname to which it transported thousands of enslaved African people. Aside from Suriname and Curaçao, Amsterdam also had a vested interest in the slave trade in Indonesia, Taiwan, South Africa and Brazil. In this manner, the city directly profited from the slave trade. Individual mayors at that time also took part in the slave trade.

There is a large, increasing call for formal apologies from the Dutch government, but so far this has not happened. Then-Minister of Education Rogier van Boxtel came close to an apology during Emancipation Day in 2001 by expressing “deep regrets” about the slavery past and Vice Prime Minister Lodewijk Asscher made a similar statement in 2012.

Caretaker Prime Minister Mark Rutte said last year that the time was not right for a formal apology. Doing so would only make the differences in opinion worse. Also, there is a fear of the consequences – the paying of reparations.

Leave a Reply to Tula the liberator, Tula the punisher Cancel reply