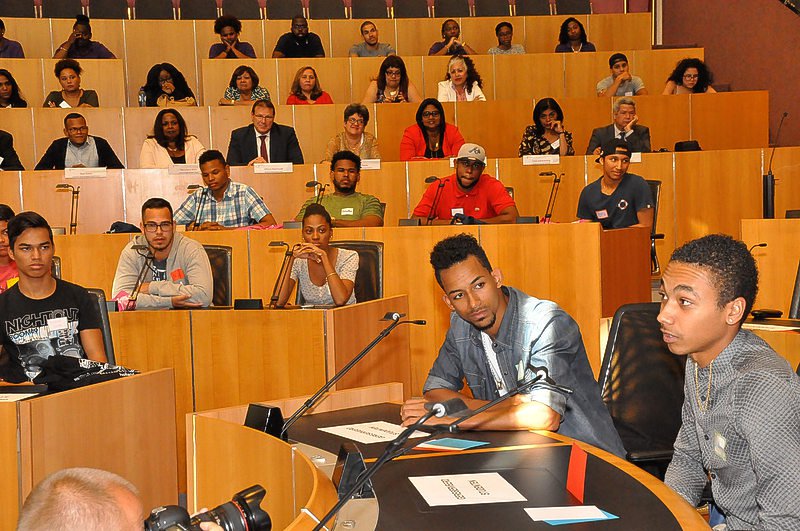 AMSTERDAM–In keeping with an annual tradition, the City of Amsterdam, on Thursday, welcomed the new group of students from the Dutch Caribbean. This year it concerns fifty new students, the vast majority being from Curaçao and Aruba, and only two from St. Maarten and one from St. Eustatius.

Amsterdam is one of the more popular student cities. Students choose Amsterdam based on the fact that it is a large city with plenty activities and a great mix of cultures, but also because it offers top level education at the University of Amsterdam UvA, the VU University, and the higher vocational school Hogeschool van Amsterdam HvA.

The most popular studies of the new group of students in Amsterdam are psychology, law and ICT, but there are also students with an entirely different study, like Indy Brooks from St. Maarten, who will study civil engineering at the HvA, and José Hupsel from St. Eustatius who is looking forward to start his studies in design and innovation engineering at the HvA.

Brooks (19), who came to the Netherlands with his 18-year-old brother Reno a student of biomedical science at the UvA, is what they call a free mover. He is not part of the group of 31 students with study financing from St. Maarten. Brooks said that so far he was happy with his new place of residency and that he was eager to start his studies in early September.

Both Brooks and Hupsel were asked to introduce themselves by Master of Ceremonies Tanja Fraai, as were several other students from Aruba and Curaçao. Asked why they chose Amsterdam, Brooks said: “It was a logical choice because I came with my brother who also wanted to study here.” Hupsel said he chose Amsterdam because of its wide variety in cultures.

Hupsel was one of the 26 students from the Caribbean Netherlands who will be guided by Aalse and Partners Student Support. Only Hupsel and one other student from Bonaire, Jeanne-Vienne Angela, opted to study in Amsterdam. “I like Amsterdam because it is a metropolis. It has much to offer. Here I can continue to work on my personal development,” said Angela.

Member of the Amsterdam City Council Marjolein Moorman of the Labour Party PvdA welcomed the students in the hall of the City Council. An “excellent choice,” she called the decision of the students to opt for Amsterdam. “Amsterdam is the most beautiful city on earth. It is home to 840,000 people and now it is also your home.”

Moorman said the new students would continue the tradition of 60 years when the first batches of Antillean students came to Amsterdam. “Some decided not to go back and nowadays we have more than 11,000 persons of Dutch Caribbean descent contributing to our multi-cultural city,” the Councillor said.

The various speakers that proceeded implored on the new students to mingle with other students besides those from their own country. “I know from experience that this has many advantages. It will benefit your integration and study results,” said Aruba Minister Plenipotentiary Alfonso Boekhoudt.

The students were especially advised to come forward with their problems and to seek help when in trouble. “Our culture is one of keeping problems to yourself; don’t show others that you are in trouble, but I urge you to talk to someone when you encounter difficulties,” said Curaçao Minister Plenipotentiary Marvelyne Wiels. She announced that as of January 1, 2017, the Curaçao Government would introduce an incentive for returning graduates: a fiscal write-off of study debts of NAf. 10,000 per year.

Member of the Second Chamber of the Dutch Parliament Tanja Jadnanansing (PvdA), who grew up in Aruba and Suriname, also urged the students to seek help. “Keeping up appearances doesn’t help. I didn’t have it easy either when I came to the Netherlands to study. In first instance I didn’t seek help, but when I did things got a lot better.”

Jadnanansing urged the newcomers to make Dutch friends. “Broaden your horizon. You are the brains of your island. Prove yourselves! Work hard, straighten your back and make your island proud. I know that won’t be easy because the Netherlands is a tough country, but you can do it,” she said.

In total more than 500 students from the six islands came to the Netherlands this summer, which is slightly more than last year. This is mostly due to a larger number of students completing their secondary education. As always, the largest group of students came from Curaçao – 212, of which 25 chose Amsterdam to study.

Representatives of various organisations were present at the information stand at Thursday’s event. The Municipality Amsterdam shared information on the many internships that the city has to offer. The Curaçao Free movers, a project of the Curaçao Government, offered its services to assist those that came to the Netherlands on their own, some 210 in total this year.

The Dutch Caribbean Student Association Hvanti of the HvA and UvA was present with a sizable delegation, and distributed information about its activities and services. Representatives of the VU and UvA welcomed their new students from the islands, more than 20 in total.

The Curaçao Study Financing Organisation SSC, and Aalse and Partners Student Services were present as well to share information and answer the questions of the new students. Also present was WeConnect, an organisation that connects the private sector on the islands and the Dutch Caribbean students by offering job opportunities.

The Municipality Amsterdam organised the welcoming reception for its newest residents for the sixth time, a gesture that was clearly appreciated by the students. They happily noticed that the flags of Aruba, Curaçao and St. Maarten flew at the City Hall on Thursday in their