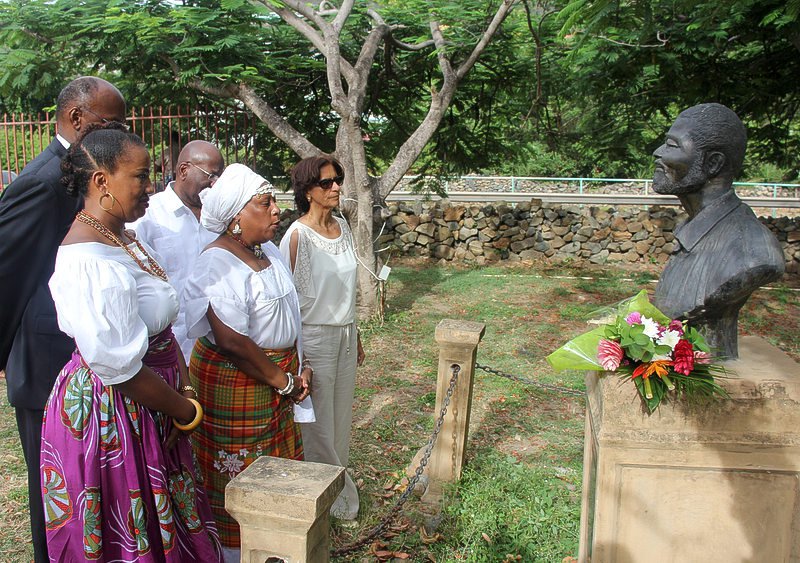 CUL DE SAC–Dignitaries, St. Maarten families and artistes gathered at Emilio Wilson Estate and Park on Friday afternoon for the official 2016 Emancipation Day Celebration and Cultural Manifestation. Many turned out to celebrate 152 years since slavery was abolished in the Dutch kingdom, under the theme “Remember When.”

Emilio Wilson Park was open to the public from 1:00pm and many families came out, some in cultural wear, to enjoy music, food, drinks and games for the children, as well as the pleasant, relatively cool weather.
The celebrations were organised by Victory Over Justice Consciously Eliminating Silence VOICES Foundation for the fifth year in succession, and the third year that it was organised in collaboration with the Ministry of Education, Culture, Youth Affairs and Sports.
Before the official programme commenced, flowers were laid at the statue of the late Emilio Wilson by Governor Eugene Holiday, Prime Minister William Marlin, Minister of Education, Culture, Youth Affairs and Sports Silveria Jacobs, Chairwoman of Parliament Sarah Wescot-Williams and VOICES President and Founder Nkosazana Illis.
People of action
The five delivered speeches all highlighted the legacy and resilience of ancestors, while also focusing on the future.
Illis delivered the opening speech, but not before she had cleaned and blessed the earth at Emilio Wilson Park with water from a calabash, followed by a minute of silence for those who have passed.
“We do not have to look elsewhere for our own history. It starts here at our own Emilio Wilson Park,” said Illis, who called upon the people to ask for themselves what they want for Emancipation Day. “Let us become people of action, following in the footsteps of our ancestors,” she said.
Minister Jacobs cited and partially sang the “Black American National Anthem,” a poem written in 1899 by James Weldon Johnson, which was put to music by his brother.
She said that freedom in mind is still a work in progress. “Our ancestors did not wait for anything and took the bull by the horns and ran for freedom. Freedom is ours. May that spirit of freedom live on for the other 364 days of the year,” Jacobs said.
With the flamboyant or July trees in full bloom around him, Prime Minister Marlin said we should remember when the Park was still a plantation, where, according to some accounts, One Tete Lokhay came “ransacking” for food to feed some enslaved ancestors she had helped escape to freedom.
“Emancipation is about freedom and freedom is the birth right of every human being,” the Prime Minister said.
He commended the organisers of the Diamond Estate 26 Run for Freedom, which he called a “chilling re-enactment” of the escape. “Those who participated in that event were to remember when our ancestors braved the darkness, the dogs, and the bullets of the slave owners to gain their freedom.”
Marlin said that despite the historical accounts of Spanish chronicler Bartolemeo de las Casas and TV series like Roots and Kunta Kinte “the brutality, savagery, inhumanity and degradation that characterized slavery” today are still beyond “our imagination and perhaps even beyond our comprehension.”
Since a few years Emancipation Day is a public holiday in St. Maarten, but Marlin said it is not meant as just another day off, but as a “day of reflection, a day to remember when our ancestors had to endure the ignominy of slavery, of forced, unpaid labour, the consequences of which are still very present with us today.”
Reparatory justice
This is one of the reasons why Emancipation Day cannot be “divorced” from the ongoing “international initiative” for reparatory justice, the Prime Minister said.
At Emancipation the slave owners were “handsomely” compensated for the loss of their properties. Marlin “personally supports the initiative for reparation as championed by the Caribbean Community Caricom,” which he hopes will “form an integral part” of the Emancipation Day celebration.
Marlin said Emancipation Day is not a walk through Memory Lane and is not about nostalgia. “What we are celebrating is the indomitable spirit of our ancestors, who knew that freedom is not a royal gift but the inalienable right of every man and woman.”
In a fiery speech, Wescot-Williams said St. Maarten needs a transfusion of the spirit of emancipation and “not the attitude of being the victim but of being victors. No spirit of apologies but of standing proud.”
Beacon of Freedom
Titled “Remember Emancipation, When, Where and Why?” Governor Eugene Holiday said that “given the prevalence of social injustices today” it is important “to invest in the further deepening and broadening of the knowledge of the significance of Emancipation Day.”
He made a plea for the building of a monument at the Diamond Estate site as a “beacon” of freedom.
“Today we stand here on the historic grounds of the former Sentry plantation remembering and celebrating the immeasurable determination and victory of our forefathers. In doing so, it is my hope that we as a people, like our forefathers, will through these hallowed grounds be encouraged and inspired to strive for a freer and better future. A future grounded in an educated, mentally emancipated population, in the elimination of crime, in better job opportunities, in a healthier society, and in perfecting race relations,” the Governor said.
The celebrations were closed off with a cultural presentation consisting of music, poetry and dance.