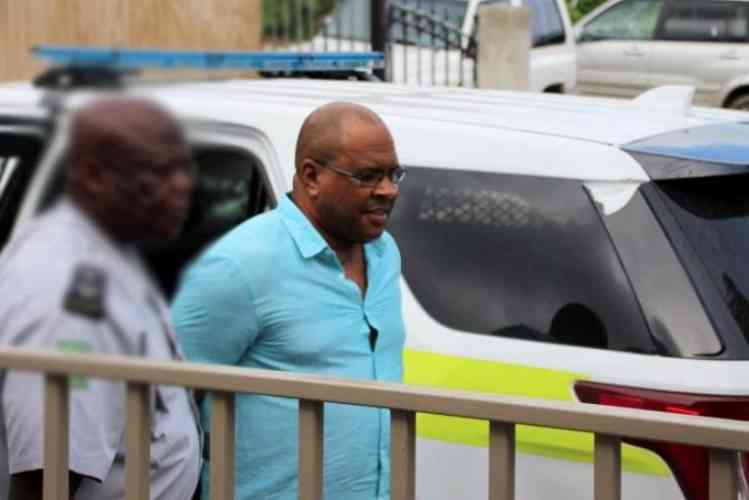 Kirk Hughes being escorted from court on a previous occasion (photo courtesy bvinews.com).

ANGUILLA–Kirk Hughes of Anguilla appeared in court in Tortola, on Monday, September 24, to answer to charges. He pleaded guilty to overstaying, failing to declare money to customs and being in possession of proceeds of criminal conduct.

He was also said to be an accomplice in smuggling six Hispanic migrants into the territory but he was not charged with smuggling.

Attorney Leroy Jones, representing Hughes, sought to persuade the court to fine his client and have the US $50,000 sum forfeited to the territory. He argued that the local government would benefit more if his client was fined rather than imprisoned because in prison he would be a burden to the country and the prison is overcrowded and under-staffed.

Hughes had admitted to the court last week that the $45,831 found in a number of local properties he had rented consists of crime proceeds. The exact nature of the criminal activity was not said. It was reported that local law enforcers had caught up with Hughes because a number of the illegal migrants had named him as their contact. They were all arrested, charged and subsequently fined $1,000 each or given two months in prison in case of non-payment.

Magistrate Christilyn Benjamin is scheduled to sentence Hughes on October 4.