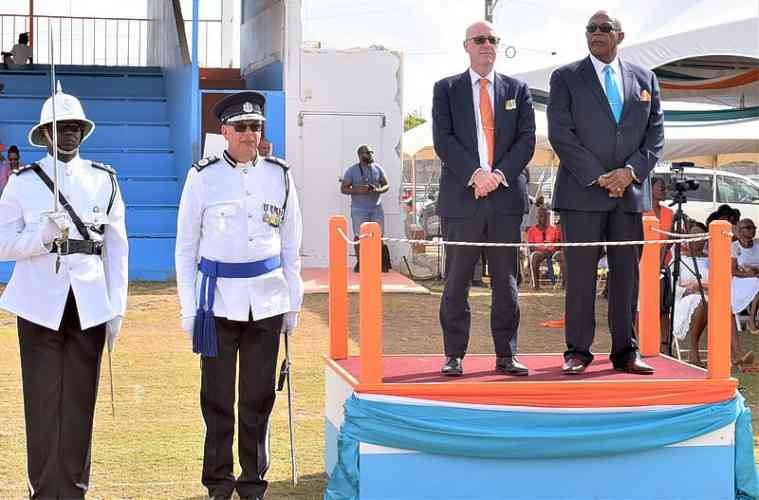 ANGUILLA–At the 52nd Anguilla Day Parade held at the Ronald Webster Park on Thursday, speakers remembered and honoured the heroes and heroines of the Anguilla Revolution. “Fifty-two years of courage and fortitude, Steadily forward we march with gratitude,” was the theme this year. The colours of Anguilla: turquoise, white and orange dominated the decorations and the clothes of the audience making for a colourful display.

The parade was led by the Royal Anguilla Police Force and the police community band and included contingents from the police, prison officers, fire service, JTR Security, girls brigade, boys brigade, brownies, guides, scouts, and path finders. The parade was inspected by Premier Victor Banks, accompanied by Commissioner of Police Paul Morrison and Inspector Keith Millet, the commanding officer for the parade.

Governor Tim Foy said he was privileged to attend the celebration, calling it an opportunity to look back to the 1960s and what life was like then and he encouraged young people to read about the Revolution. He commended past chief ministers – the late Ronald Webster, the late Sir Emile Gumbs, as well as Osborne Fleming, Hubert Hughes and Victor Banks. He spoke of the importance of women in the Revolution and of all who protected the people then and now. He said the media is a key institution and congratulated Radio Anguilla on its 50th anniversary and Nat Hodge from The Anguillian newspaper. In addition he paid tribute to the unsung heroes, including the teachers, nurses, doctors and other ordinary contributors. He said Anguilla had made great strides since Hurricane Irma and was on a positive trajectory, although reconstruction was not yet complete.

Premier Victor Banks said Anguilla Day should have an atmosphere of gratitude for the miraculous recovery of the island. He noted the improvements in tourism with more rooms available now. He also spoke of the amended Constitution and the importance of extending the Anguillian status to grandchildren, keeping young people in focus and encouraging them to be willing to work hard and train hard. He paid homage to past leaders with special mention of past chief ministers, commending them for their service to Anguilla. He also commended honourees past and present.

Leader of the Opposition Palmavon Webster spoke of the beauty of the island and the need to cherish and protect it. She stressed the importance of children who will inherit the legacies left and are the hope and promise of the nation. She remembered the heroes and heroines of the Revolution and the important part they played. She stressed the importance of the nation being united and called on every Anguillian to take the island forward with love as one family, one destiny and one Anguilla.

Miss Anguilla, Mikela Skellekie presented the awards for the Anguilla Badge of Honour and Queen’s Certificate. The awardees for this year were Franklyn Kenneth Gumbs, Kenneth A. Richardson and Clarence Bridgington Fleming for their critical role in the Anguilla Revolution; and Horace Brookes, George Brooks, Oluwakemi Linda Banks and James Lawrence Carty for their service in social, political, economic, and cultural development in Anguilla since the Revolution. A special award in the form of a plaque was presented to Kenneth Hodge who has headed the protocol team for many years.