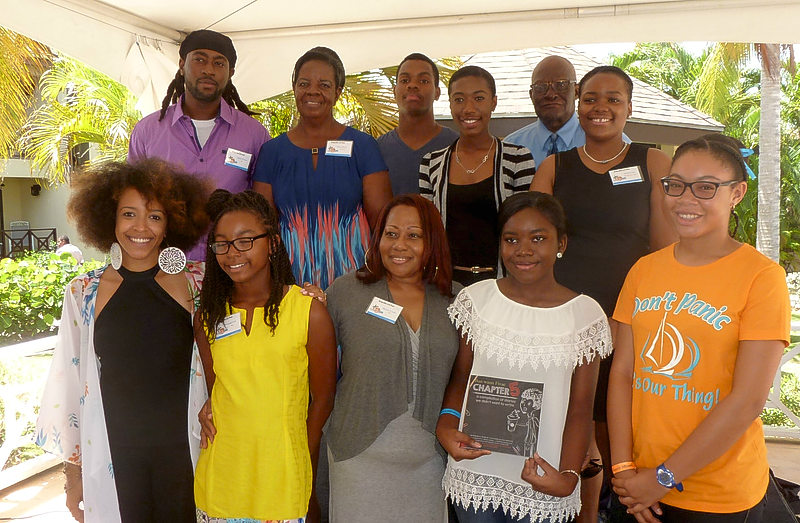 Anguillian presenters at the Rise up and Shine breakfast session.

ANGUILLA–Presenters on Saturday, May 20, Rise up and Shine breakfast session at the Lit Fest were from Anguilla. It was under the theme “Revolution Revelations” and held in the beautiful setting at poolside of Paradise Cove Boutique Hotel.

Winners of the Malliouhana Poetry Competition were the first to take the stage. In the junior category, the winner of the poetry on the page was Susanna Croft, who read her poem based on the competition theme “50 Not Out.”  The winner of the juniors in the performance category was Veronica Connor, who read her poem with much passion and good diction.

In the senior category, the winner of poetry on the page was Sharon Lake with her poem “Revolution Woman” that she read to the appreciative audience. Winner of the performance category was Vanessa Croft-Thompson with her poem “Hidden Opinions” that again was much appreciated.

Alexis Connor read a very moving story of his life as a teenager, and the hardships and beatings he endured. His “escapes” from his curfew at night gained much sympathy from the audience, as he would leave his house and meet up with his friends.

Verna Bryan and Winston Harrigan told of their experiences and adventures growing up during the 1960s before and during the Revolution. Harrigan recalled how he helped in the Revolution by transporting men to out stations to guard the beaches. He was elected as one of twelve councilmen to serve on the Anguilla Island Council. Bryan was young in the Revolution, but inspired by older women, joined in many demonstrations, carrying large placards and supporting the men.

Four students, who had contributed to the Ban Waun Five book, read excerpts from their stories. The book was the first of its kind containing essays written by students – with the title ‘Stories we did not want to write.’ They spoke highly of their English teacher, who encouraged them in their language efforts and gave them a love of literature.

Panel discussions and workshops continued throughout Saturday with the Lit Fest concluding that day with a Calypso Explosion, featuring Short Pants, Sugar Aloes, Baron, Roxxy and junior and senior calypsonians from Anguilla.