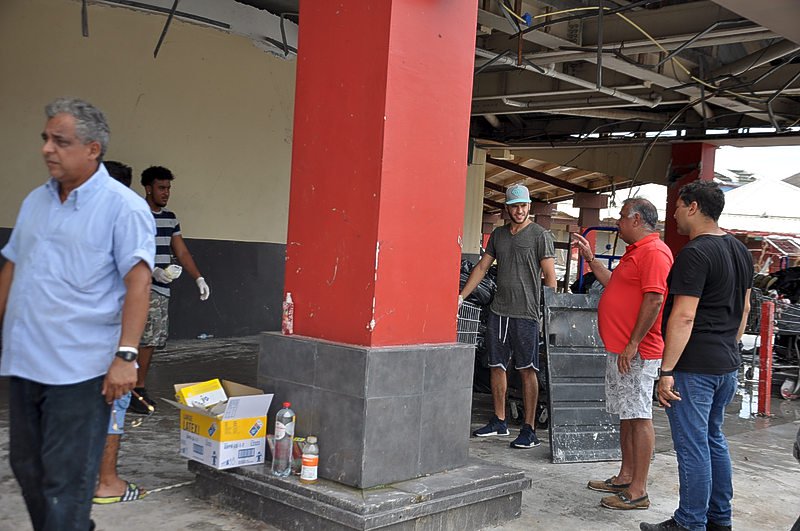 PHILIPSBURG–While he condemns the looting and destruction of Le Grand Marche and Carrefour Market supermarkets following Hurricane Irma last week, official of the businesses Anil Sabnani told The Daily Herald on Thursday that he is committed to St. Maarten and will rebuild stronger than ever.

“I am there for the people of St. Maarten and I am not going to disappear,” Sabnani said, while overlooking cleaning works at Le Grand Marche on Bush Road on Thursday. “I am here for the people. I have 250 staff members and they are my first concern. And I am going to make sure that we come back stronger.”
Asked for his thoughts on the looting of the supermarket chain, Sabnani said this was sad. “It is not acceptable, but at the end of the day what has happened is a result of lack of government control. It is very unfortunate for me to say this, but this is what it is. But at the end of the day we are not going to point fingers, we are not going to blame, we are one country and we will make this country better than before.”
Sabnani said the looting has resulted in “complete loss” as persons have “looted everything” at the stores on Bush Road, Cole Bay and at another location. “It’s a complete loss.” He said the Carrefour Market store at Porto Cupecoy is slightly damaged, but is workable and that supermarket has already reopened.
When asked Sabanai said he does not have a specific timeline when he will complete the rebuilding of the damaged stores to reopen.
He had a message for government. “Let’s get the business people together and rebuild. At the end of the day we need to get people here, we need to get people to rebuild so at the end of the day there is hope for St. Maarten.”
As it relates to the 250 persons working at the various supermarkets under the Le Grand Marche and Carrefour Market chains, Sabnani said “my staffers are my family so at the end of the day I have to take care of them.”