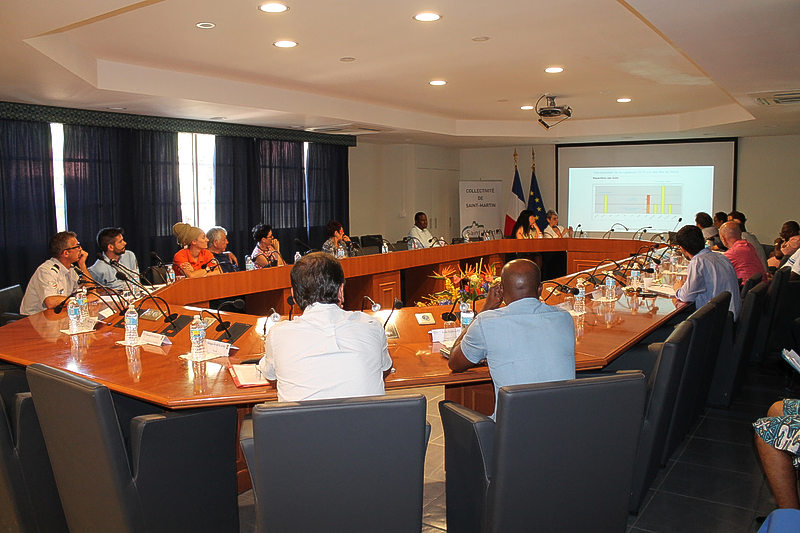 Present were Préfète Anne Laubies and representatives of the Gendarmerie, Police Territorial, Red Cross, Sea rescue service SNSM, Fire Department, Bethany Home, Ports Authority, Grand Case Airport, Maritime Affairs, etc.
Hurricane season begins June 1 and both sides of the island evaluate their readiness in the event of a major storm hitting the island, before, during and after the event.
“It is thanks to the pooling of resources, good planning and partnership between the Collectivité, the State services and actors in the field that we can be well organised and prepared in case of such a threat,” Hanson said in her introduction. “The St. Maarten authorities are an integral part of this partnership and we are currently working together on the formalisation of a common hurricane vigilance plan. With natural disasters it is always better to plan ahead and it is in this spirit that we are meeting today.”
She noted that management of major risks is represented by Territorial Councillor Louis Fleming and head of the department, Charlotte Terrac.
The Collectivité has produced a booklet on major hazards and hurricane preventative measures as a communication tool for the population. It is distributed in schools and other strategic points around the French side.
“Past hurricanes that have struck the territory have shown us that we can never underestimate this phenomenon,” she added. “Be it a tropical depression, storm or a hurricane, we have to ensure the territory is ready.
“Throughout the hurricane season we will advise the population on clearing their properties of loose items and preparing the necessary food and drink reserves, so as not to be taken by surprise at the last minute.”
The meeting began with a presentation by Alain Muzelec from the Meteorology Office of Guadeloupe on history of past hurricanes and a reminder of the colour-coded alert system in use.