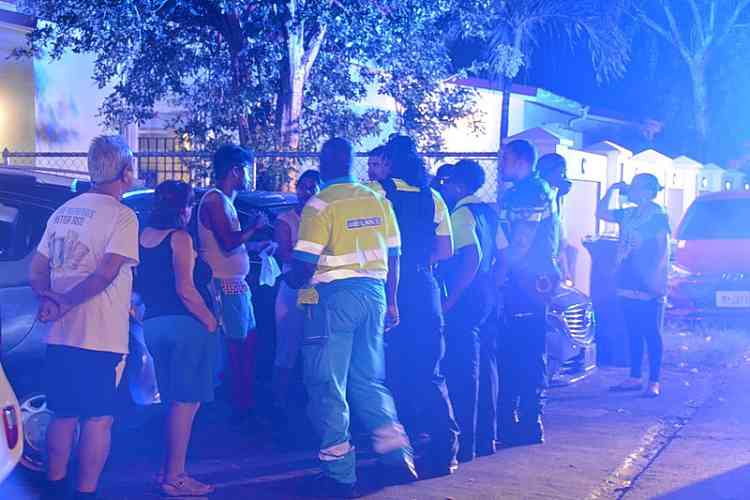 Police officers and neighbours surrounding the Venezuelan national who was attacked on Monday evening in Retreat Estate.

ST. PETERS–Violent acts against Venezuelan nationals in the district of St. Peters are increasing, as another robbery took place on Monday evening. A man was driving his scooter from a supermarket in Retreat Estate and was ambushed by a robber dressed in a hoodie near the Venezuelan’s apartment.

“I was turning the corner with a big bottle of water and I felt a blow to my head. This caused me to fall on the floor and [I – Ed.] thought a vehicle hit me. I woke up and saw a man dressed in a hoodie fighting to get my scooter started and drove off with the bike shortly after. I stayed down and got home,” said the man, who had bruises to his head and elbow.

Police and ambulance officials arrived at the man’s home after 9:00pm. Police officers spoke to the victim and called patrols to search the area for traces of the man’s bike.

“Police officers are paying special attention to the St. Peters district since reports of more attacks are taking place. We would like the community to know that we are aware of the situation and will put measures in place to mitigate the problem in the neighbourhood,” said Police spokesman Chief Inspector Ricardo Henson.

This past weekend the police Special Robbery Unit and Homicide Department started investigating three armed robberies which took place on July 6 and July 7 involving several Venezuelan nationals. These armed robberies took place on St. Peters Road, Soursap Road and Marigot Hill Road where the victims live or were simply walking on the street.

One Venezuelan man was stabbed grievously in his back on Sunday morning. The victim was transported in critical condition to the St. Maarten Medical Center (SMMC) where he had to be immediately operated on and remains for observation and further treatment in serious but stable condition.

“These cases are all under investigation and detectives are asking the community who has any information that can shed some light on these cases to step forward and share this information. To share any information, you can call 542-2222 ext. 203/204/205 or the anonymous tip line #9300,” said Henson on Monday.