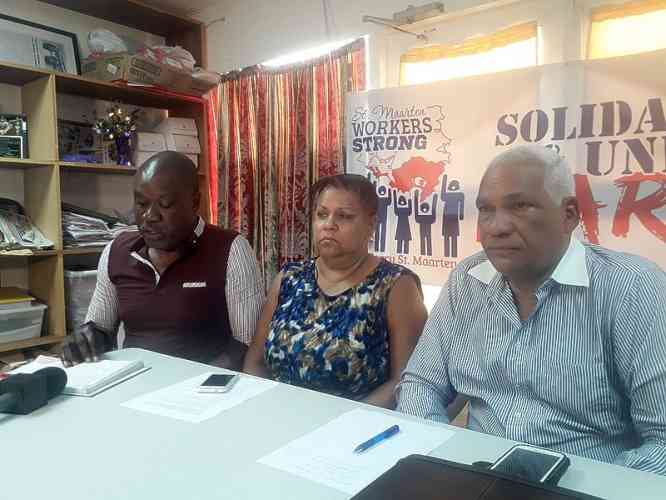 PHILIPSBURG–The Anti-Poverty Platform says the recently-announced construction training whereby persons from St. Maarten would be trained in the trades sector in Trinidad is “bogus” and is an election gimmick.

Anti-Poverty Platform co-coordinator Alberto Bute of the Consumers Coalition said there is no way persons can become carpenters, masons, plumbers, electricians or welders in six months. Bute, an electrician by training, said persons can only become assistants in these areas in six months and such training can be conducted right here in St. Maarten using the vocational schools that already exist and tapping the many skilled persons in the construction field in the country.
The training was announced earlier this week and Education Minister Jorien Wuite at the time encouraged persons to sign up at the registration drive to be held today.
“They are embarking on what seems to be a nice project in a political year,” Bute said at a press conference on Thursday. He said instead of being involved in political gimmicks, authorities should instead focus on the many persons in the country who are without a roof over their heads.
To send someone on training abroad, he argued, their ticket would have to be paid, housing would have to be paid and they would need funds for their sustenance in addition to paying for the courses. If these persons are trained in St. Maarten, a lot of the cost would be eliminated.
“There are technical schools in St. Maarten that are empty and there are qualified teachers who can teach here. They should look into that rather that spending on a bogus programme,” Bute argued.
He said also that in sending someone to Trinidad for electrical training, it has to be determined whether they will be trained in European techniques, which St. Maarten uses, or Trinidad techniques.
“This is a bogus programme. This can only work if they are being trained to be a helper and if this is the case then we can teach them here. You can’t play politics with something like this,” Bute said.
He said there were many professionals in St. Maarten who would be more than willing to teach the youngsters for free, but he urged authorities to pay them, as they are willing to pay Trinidad to teach them.
According to a press release issued earlier this week about the programme, persons would be trained at MIC Institute of Technology in Trinidad. Young unemployed persons in St. Maarten would be provided with study financing via the Netherlands-funded Studying in the Region Project, to pursue the training.
According to the release, persons can become certified in areas such as building construction (general), carpentry, masonry, plumbing, electrical installation, welding and general property maintenance. The courses are Caribbean Vocational Qualification (CVQ) level one certifications.
A registration drive for the programme will be held on the main floor of the Government Administration Building today from 9:00am to 1:00pm. Registration is open to persons ages 18-35 who are Dutch nationals or possess a permanent residence permit, have a strong interest in the construction sector, are willing to live and study abroad temporarily, have basic literacy and math skills and preferably some years of vocational education.
Also at Thursday’s press conference were Anti-Poverty Platform co-coordinators Claire Elshot and Raymond Jessurun. Other issues raised at the press conference included the tariff hike at St. Maarten Medical Center (SMMC) and the unemployment benefit for Ministers and Members of Parliament (MPs), amongst other issues.