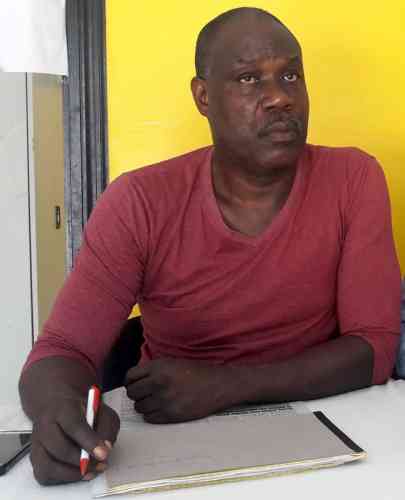 PHILIPSBURG–During a press conference on Thursday, adequate housing for residents was highlighted by the St. Maarten Anti-Poverty Platform members. This after word spread that several households belonging to the St. Maarten Housing Development Foundation in the Cole Bay area were cleared by bailiffs and police officers over the weekend.

Video of police and bailiffs removing the families surfaced on social media this past weekend and showed officers placing the belongings of the families out on the side of the street. Anti-Poverty Platform Member Alberto Bute said on Thursday that the group had taken note of social media comments about the eviction in Cole Bay this past week.

“We were asked what we think of the eviction, especially of households with children. The first questions which came to our mind were: “Could not these people be assisted to move into another house, instead of putting them on the street? Were these households offered adequate housing elsewhere? Where are the 500 homes promised by the political parties before election?

“We have been informed that these people entered into these unoccupied homes in Cole Bay, emergency homes built after [Hurricane – Ed.] Luis, to seek shelter after Hurricane Irma destroyed their home. A lot of persons commented [that] this squatting of the homes was wrongdoing, arguing that everybody has to follow the correct procedures to get the keys to a home,” said Bute.

Bute added, “If there are sufficient affordable homes, then eviction because of illegal occupation of homes is understandable. But we know that there is still a huge need [for] social housing! Some commented that these homes in Cole Bay were built after Hurricane Luis to temporarily house people whose homes were damaged by the hurricane. The 911 houses in Dutch Quarter were built with the same purpose.

“What happened is that for years the political parties in government did not arrange the construction of sufficient social housing for people who are in need [of] affordable social housing. We think that the Ombudsman who started a recovery investigation going into the community should look into these housing situations of the evicted households in Cole Bay and of those in the 911 homes in Dutch Quarter too, to come up with recommendations to resolve this need of the people.

“The story of the people in these homes will illustrate not only after Irma, but since Hurricane Luis what went wrong in St. Maarten. Why [do] people in St. Maarten still lack sufficient resilient, affordable social housing? We will approach the Ombudsman to discuss this structural need [for] adequate housing facilities in St. Maarten,” stated the Anti-Poverty member.

Bute concluded his thoughts on the topic by stating,” As we have been advocating, addressing this housing need is not only a responsibility of the government of St. Maarten, but also [of] the Kingdom government, because adequate resilient housing is a human right that the Kingdom has to guarantee for all households in the Kingdom of the Netherlands.”