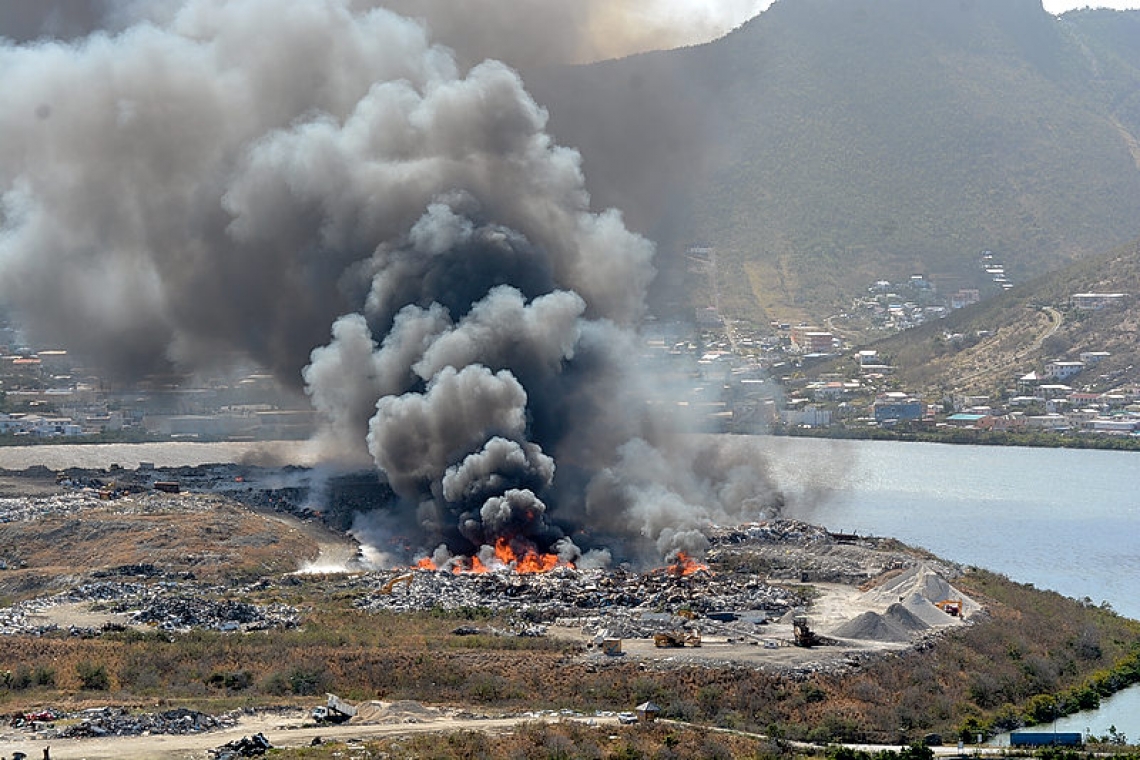 In 2018 alone there were 32 major fires at the sanitary landfill, which reached its maximum capacity in 2008. (File photo).

POND ISLAND–The Joint Court of Justice has overturned the judgment of the Court of First Instance in the so-called “Dump” case involving stench and other nuisance caused by fires at the sanitary landfill on Pond Island. On Friday, judges denied the claim of litigants that the Fire Suppression Project (FSP), which is part of the Emergency Debris Management Project (EDMP), has to be completed by May 1, 2020.

On August 16, 2019, Country St. Maarten filed an appeal against the Court of First Instance’s order to finalise the Fire Suppression Plan by May 1, 2020, at the latest. In case of non-compliance the Court ordered Government to pay daily fees of NAf. 10,000, with a maximum of NAf. 10 million, to Nature Foundation St. Maarten.

Litigants Barbara Cannegieter, Koster, and BZSE Attorneys at Law had called on the Joint Court to uphold the verdict and to attach daily penalties of US $5,000 to a maximum of $1 million to the verdict.

The main reason for the Appellate Court’s decision to overturn the lesser court’s judgment is that there is no, or at least insufficient, nuisance anymore to arrive at the conclusion that the problem at the dumpsite should be considered unlawful.

There have not been any surface fires at the dumpsite for a year and any nuisance that still exists, such as a foul smell and stench, is minimal and related to any dumpsite, according to the Joint Court’s judges.

The landfill, which reached its maximum capacity in 2008, caused many problems over the years. In 2018 alone, there were 32 major fires, and permanent underground fires reached a temperature of 300 degrees Celsius (572 Fahrenheit).

The Appellate Court considered it impossible for the Government of St. Maarten to meet the May 2020 deadline, as this also depends on World Bank procedures.

The execution of the fire-suppression plan includes a number of “drastic and time-consuming steps,” including the Resettlement Action Plan which includes the temporary relocation of approximately 100 families and businesses in the vicinity of the landfill. The relocation has yet to start and the Court considers it practically impossible that this will be realised before  May.

“Although Cannegieter et al have questioned the progress of the EMDP and the efforts of Country St. Maarten, it is currently not likely that it is due to the Government that the FSP will not be implemented before May 1,” the Appeals Court stated.

In the Court’s opinion, St. Maarten should be making “maximum efforts” with the World Bank to arrive at a structural approach to the underground fires. The threat of new nuisance is sufficiently realistic; for example, when a hurricane provides large  quantities of oxygen, the Court said. However, this does not alter the fact that, in the Court’s provisional judgment, there can be no question of unlawful nuisance.

There are also no concrete indications that Government will discontinue the measures taken, including taking over dump  management and applying the alternative daily cover, and/or will terminate the agreement with the World Bank and the Netherlands, or that it will forfeit the financial support in any other way. In addition, setting a new deadline would be guesswork, the Appeals Court stated, because parties had not provided sufficient leads for this.

While there is no nuisance at the moment, the Court alludes to the possibility to file a new injunction in case there are reasons to believe Government is to be blamed for delays in the execution of the FSP.

Attorney Koster said the Court described the feelings of plaintiffs Cannegieter, BZSE and himself perfectly. “We have started this case in the public interest. We did not charge anyone for attorney’s fees, we did not collect litigation fees from Government, and Barbara Cannegieter, Jelmer Snow, me and the other BZSE lawyers have spent countless hours pro bono to do what needed to be done.

“While our case, especially in an injunction, was legally-speaking not a challenging one, our intention was to use the momentum back in August 2018. The dump was burning constantly, and with the Trust Fund and the involvement of the World Bank, we saw an opportunity to seek attention for this very bad and unhealthy situation.

“Therefore, we have actively sought local and international media attention. Barbara has reached out tirelessly to many people in the community to get witness statements, seek support via social media, which helped to build the foundation of this case. This truly was a team effort,” Koster said.

The Court confirmed in its ruling that these efforts have led to a situation whereby Government took over and improved dump management so that surface fires hopefully remain something of the past.

The Appeals Court also stated that this litigation, with the active involvement of the Court of First Instance, has sped up the entire process of policy-making regarding the dump, and has not slowed it down as Government had argued.

“While the Court has ordered us to pay Government’s legal fees of NAf. 900, Government could consider doing the same as what we did: not collect these from the plaintiffs,” Koster stated.