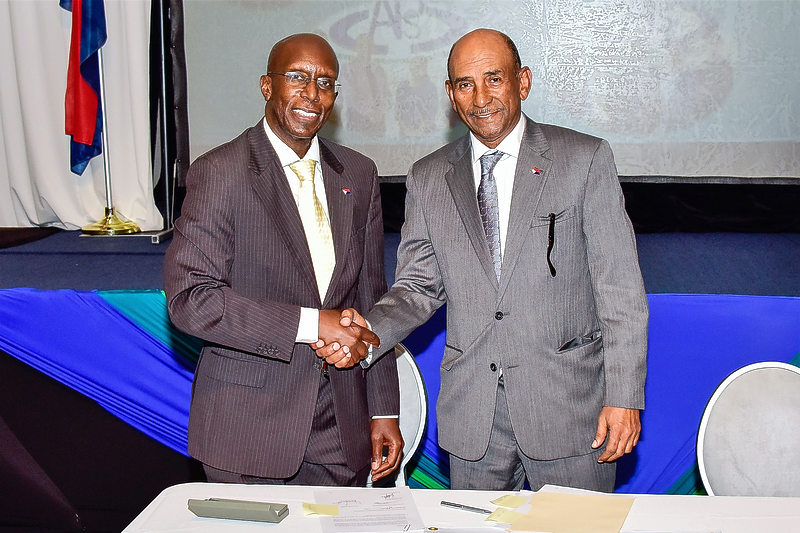 PHILIPSBURG–Actual pension reforms in St. Maarten are one step closer to being implemented following the signing of an agreement between the general pension fund administrator APS and St. Maarten’s Finance Minister Richard Gibson, Sr.

The agreement was signed at Sonesta Maho Beach Resort on Friday as a major highlight of the APS 2017 pension seminar held at that venue. Signing on behalf of APS were APS board officials Franklyn Richards and Guilliano Saturnilia.

“The agreement reached between St. Maarten’s general pension fund APS and the country’s Minister of Finance is part of the process on pension reform, which has been ongoing,” said APS board chairman Richards. He added that the agreement specifically takes into consideration the need for structural changes to the pension plan that would make it more sustainable.

“Since participants in the APS fund are entitled to a lifelong pension, as stipulated by law, APS is required to have a minimum amount of funds always available. This pension provision makes sure that APS would be able to meet its financial obligations to all its participants, when that time arises,” noted Richards.

The agreement takes into consideration aspects such as longer life expectancy and the actuarial return. These may have a substantial negative impact on the pension fund’s financial position, thereby limiting its ability to meet its legal pension obligations.

The signed agreement entails that the Government of St. Maarten will inject capital into the pension fund if the fund’s financial position is threatened, due to these factors.

Discussions preceding the agreement carefully looked at the participants’ life expectancy. Cognisant that it is impossible to predict how long a participant will live, the pension fund uses actuarial tables and historical data of its own participants, along with local and regional statistics, to calculate how many years the pension fund can be expected to pay out a pension to each of its participants.

These include payment of seniors’ pensions and benefits to their surviving family members in the form of widow(er)’s and orphan’s pension, in the event of their passing. Currently, this period of paying out pensions is about 30 years in duration.

However, with persons enjoying a longer life span a larger provision would be needed to cover a longer pay-out period in the future. Another important aspect, which APS discussed with Government, is the long-term interest yield the fund can expect to earn on relatively risk-free investments, such as U.S. treasury bonds.

This is used to calculate the provision that would be required. The actuarial return is now set at four per cent, similar to the past years. With interest rates remaining low for many years, expectation is that the actuarial return rate may have to be lowered in the coming years.