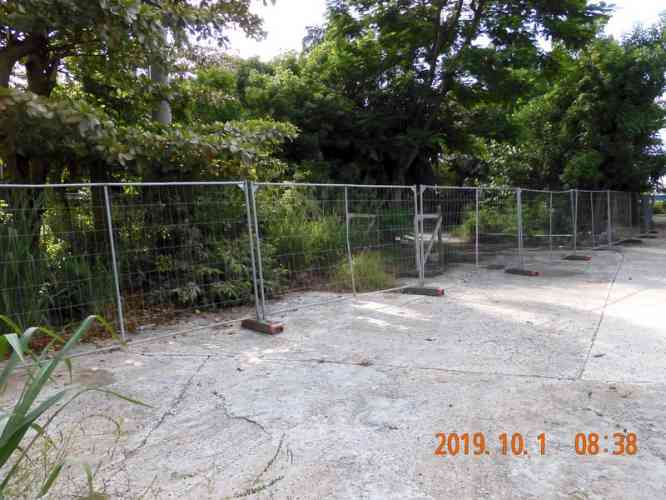 Mary’s Fancy Plantation being fenced off to protect the area, trees and monuments during demolition works.

This will include preparation of the property for the restoration of the monuments, which entails the demolition of the structures that were extremely damaged after Hurricane Irma and those that have no historical value and are not monuments.

Liccom N.V. is the selected contractor that will be executing the demolition works, during an estimated period of six work weeks. Special precautionary measures will be taken to ensure protection of the identified monuments and valuable trees that are on the property, APS said in a press statement on Tuesday.

Mary’s Fancy Plantation was a sugar plantation in the late 18th century and then was used as a plantation hotel from 1963 to 1976. The Plantation House was once a restaurant, which APS will be restoring to include in a multi-functional area.

“APS is happy to be able to start with this phase of the project, as it took over nine months to obtain the necessary monument permit. APS has been working with architects on the preliminary design to start the upgrade of this beautiful historical property that will contain a high-end eco/boutique hotel, an art gallery, and a restaurant surrounded by the preserved trees, some of which are Royal Palms, Mahogany, Sandbox and Ficus trees,” according to the APS statement.

Mary’s Fancy Plantation contains four monument structures: the former owner’s residence referred to as “The Plantation House”, the sugar-boiling house, servants’ quarters, and a brick oven. APS had reconstruction work executed on the rock wall alongside L.B. Scott Road, the entrance and exit roads of the property, the reconstruction of a bridge and upgrade of the Zagersgut, as part of its phase one.

St. Maarten Archaeology Centre SIMARC is responsible for the execution of the archaeological digs, tree inventory and consultation. The collaboration with SIMARC grants young locals the opportunity to be actively involved in the project as well, the release said.