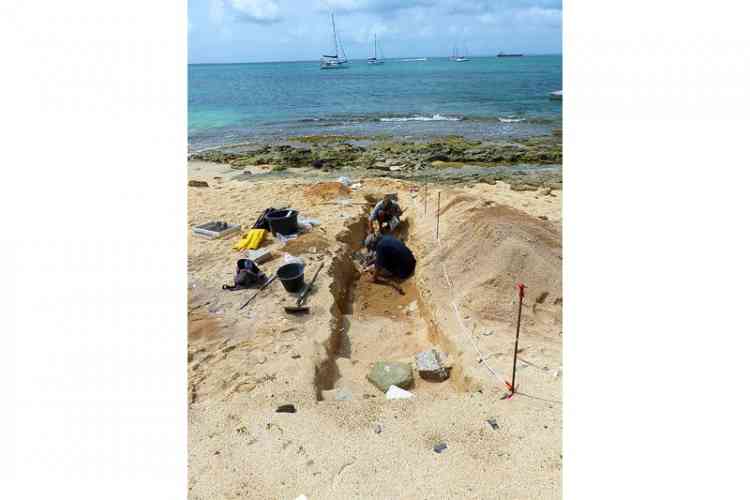 MARIGOT—Archaeologists from St. Martin and Guadeloupe are currently excavating three new sites in St. Martin that are part of eighteen new ones unearthed on the coast line since the devastation caused by Hurricane Irma in 2017. One site in Baie L’Embouchure (Le Galion) was presented to the press last week.

The three sites under investigation are at Le Galion, Morne Rond in Sandy Ground, and on Green Cay, the small island off Orient Beach. Exceptional funding for these excavations, and for one in Petit Terre, Les Saintes, was obtained from the Ministry of Culture. Archaeologists are spending one week at each for tests except at Green Cay where they will spend two weeks.

The new discoveries not only add to the inventory of known sites but also reveal more knowledge and insight into the various pre-Columbian periods of occupation.

In charge of the excavations is archaeologist Natalie Serrand from Institut National de Recherches Archaeologiques Preventives (INRAP) under the supervision of the Ministry of Culture. She is joined by the Collectivité’s archaeologist and Director of Archaeology and Scientific Affairs, Christophe Henocq, and archaeologist Fabrice Casagrande.

The new excavations have come about as a result of the Collectivité’s survey of the coastline authorized by Service Regional d’Archeologie (SRA) and conducted by Henocq in October 2017 to determine the impact of the hurricane on known sites of which there are 90 on the coast and whether new ones had been exposed. The exhaustive survey took almost a year to complete. His findings were compiled in a 700-page report that was presented at the 28th International Association for Caribbean Archaeology (IACA) congress held in Barbados from July 21 to 27, and also to President of the Collectivite, Daniel Gibbs.

The site at Morne Rond close to the entrance of the channel in Sandy Ground was exposed by the waves washing through the sand exposing shells, but also from private excavation work for rebuilding.

At Le Galion waves during the hurricane pounded against the small round hill in the middle of the bay causing erosion and exposing pottery, stone tools and shells, and evidence of a settlement.

On Green Cay small fragments of pottery had already been found there in 1993 but nothing very significant. This time waves hitting the island from the south and east washed heads of coral inland exposing a sand dune that contained many large fragments of pottery mixed up with coral.

Henocq said Green Cay has evidence of a settlement of Indians from the Neolithic period between 900 and 1,300 A.D.

“At Morne Rond in Sandy Ground we found an accumulation of shells in grey sand which also contained charcoal for their fire places near the dunes where they would have been eating their shells,” Henocq explained. “At Le Galion we found “midens” which are the piles of trash from whatever the Indians were eating, shells or fish bones, or discarded pottery. All of this was buried for centuries until the hurricane hit the hill.

“In the six-square metre area that we excavated we also found stone tools. We believe there was a real settlement there, dated between 900 and 1,300 A.D. like Green Cay. Green Cay might be more recent due to the shape of pottery but that can only be confirmed with radio carbon dating. We know it’s a settlement at Le Galion because we found stone tools, flints, finished tools, cassava griddles made of clay, fire places and trash piles.

“On Green Cay there’s no evidence yet of tools. For the moment it’s hypothetical. We would also like to figure out if Green Cay was attached to St. Martin at one time by a sand ridge to Orient Beach.”

The reports on the three excavations will be presented to SRA at the end of the year. More grants are expected next year to excavate more of the 18 sites.

Asked about whether St. Martin will have a museum again, Henocq said since the hurricanes many other priorities including reconstruction had taken preference but discussions may start on it next year. The museum was formerly housed in the historic old jail opposite the Catholic Church. All the artifacts have since been kept in storage in the media library which itself is damaged as is the old jail. For now, there’s no news on renovation to either building.