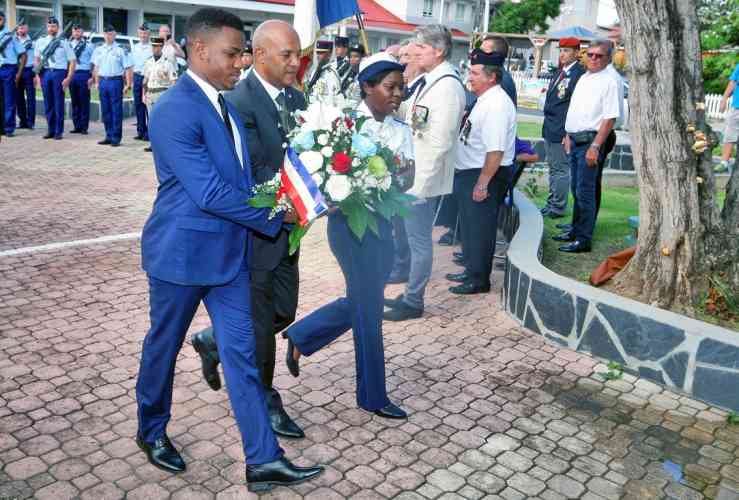 Lt. Colonel Sébastien Manzoni, Deputée Claire Guion-Firmin, Préfète Sylvie Feucher, Senator Guillaume Arnell, and President Daniel Gibbs pay their respects to the fallen of the First World War. Behind them are children from classes CM1 and CM2 of Alphonse de Lamartine primary school who sang the Marseillaise and a Creole Hymn during the ceremony. (Photo Roger Masip).

MARIGOT–Elected officials gathered at Hotel de La Collectivité’s war memorial on Saturday to celebrate the one-hundredth anniversary of Armistice Day, a day early due to the St. Martin Day celebrations on Sunday.

The Armistice, signed on 11 November 1918, ended the First World War and gave hope for peace and stability.

“Need we remind you that 18 million people, civilian and military, lost their lives during the First World War. This commemoration is an opportunity for us to honour the victims of this world conflict,” said President Daniel Gibbs in his address. “It reminds us how much the duty of remembrance is necessary to know our past and to transmit it. Many people from St. Martin participated in the conflicts in Europe and North Africa.

“In 2014, the joint work of Association des Anciens Combattants de St. Martin and the Territorial Archives had already made it possible to highlight the participation of St. Martiners in the First World War through an exhibition in the lobby of Hôtel de la Collectivité. Biographies recalled the reality behind the 15 names inscribed on the memorial plaque of the war memorial, paying tribute to the fighters who died “for France.”

“This exhibition also honoured the work of young St. Martiners and their teachers who made war diaries in homage to soldiers Charles Cocly and Georges Richardson. Moreover, these works had been rewarded within the framework of the competition “Les Petits Artistes de la Mémoire” on the Great War by winning, at the regional level, the first and second prize.

“From then on, the duty of remembrance that we owe to our ancestors was on the march. The research of the Territorial Archives led to the discovery of a list of 76 St. Martiners who had participated in this conflict but who had been forgotten. And the research was only just beginning.

“It is thanks to the excellent research work of Serge Gumbs who for four years collected and analysed various documents with the support of our Territorial Archives, that we can today pay tribute to all our St. Martin soldiers; those who died on the battlefield and many who returned safely to our island.

“Serge Gumbs has been able to identify 137 St. Martiners to date. You will be able to discover some of them at the exhibition presented, for the 100th anniversary of the Armistice, in the lobby of Hotel de la Collectivité. It is with emotion that some of these faces emerge from the past, from a past that brings many nations and peoples together in a painful memory of the experience of war.

“More than 16 per cent of the male population at the time participated in the Great War. In 1914, this represented a very large part of the population of St. Martin. What they experienced, what they saw, what they felt, no one will know exactly because the majority of our St. Martin people have kept silent and have not passed on their terrible experience. And we can perfectly understand that.

“I would like to thank the Association des Anciens Combattants and Serge Gumbs for the work they have undertaken, which allows us to better understand our past. Like this research, only a rigorous discipline of history will allow us to remember and not forget the participation of our ancestors in a world history.”

“That is why I can only encourage everyone to get closer to the Territorial Archives of St. Martin to nourish and enrich our common history, so that it can be preserved and passed on fro