Home Local News Army Engineers on a mission of repairs 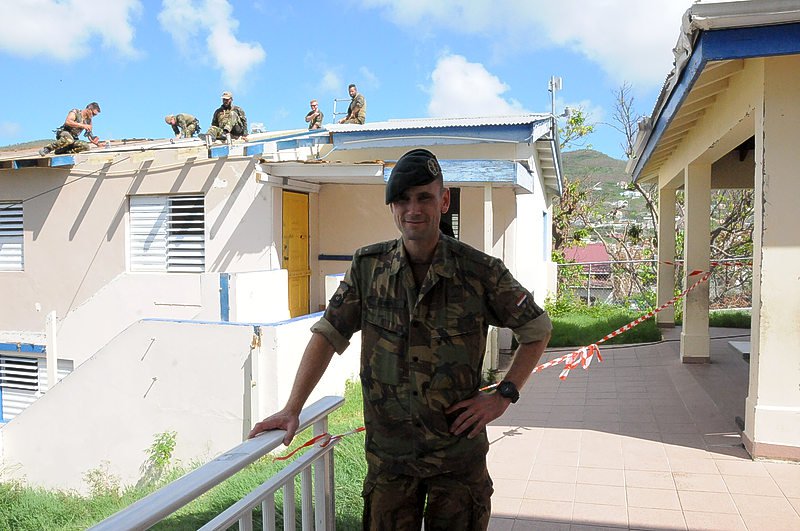 PHILIPSBURG–Restoring essential infrastructure to damaged buildings and coming up with inventive ways to make existing buildings stronger are just some of the tasks performed by the Netherlands Army Engineers situated on-island.

Major Maarten Zomer commands the special 130-strong unit that is placed at different locations in St. Maarten. The men arrived after the passing of monster Hurricane Irma devastated the island on September 6.
“When we arrived we started with a critical assessment of damage to major buildings,” stated Zomer, who was overseeing his men fixing classrooms at Hillside Christian Schools this week.
Major Zomer said the lifelines of the island were first on the list to repair and secure. The engineer group worked on Princess Juliana International Airport SXM, Port of St. Maarten and St. Maarten Medical Centre, as they found them important to repair so they could operate as much as possible.
One of the major challenges for the platoon was mobility, according Zomer. “Most roads were blocked by debris and we assisted with the clearing of major roads right after the major Hurricane Irma. The schools became a priority after our work was done with repairing the lifeline buildings of the island.
“We started working on the schools. Together with the Public Works Department we looked at what could be repaired right away. So, if a building is damaged, we won’t work on it immediately, we would work on schools with less damage, fix those and work on the complete damaged schools after,” stated Zomer.
The unit has repaired 12 schools thus far and plans to complete major repairs to schools and other buildings before leaving for the Netherlands on November 1.
“Four schools need to be demolished and rebuilt and we agreed with VROMI that those will be done at a later stage. Getting materials was also another challenge because most of the time when we needed specific material for a particular building, it would not be available. We had to get creative most of the time and fixed it anyway with something else,” he said.

Festival Village
Government has plans to house people rendered homeless by Hurricane Irma in the “Village,” as the location on Pond Island is referred to. Prime Minister William Marlin told Members of Parliament (MPs) recently that “several hundred people” can be housed at the location.
The Village has 79 booths, of which eight sustained damage during Irma’s passing. The engineers have been working overtime to get the Village ready for these persons. Zomer said they are awaiting 40-foot containers to house shower areas for the persons who plan to live there.
The existing bathrooms will be used as is, according to the major. The two 40-foot containers will consist of 10 showerheads per container, one for men and the second container for women.
“We don’t have a timeline to say when it will be ready, because we are awaiting these containers to reach the island,” said Zomer. He is also pleased with the cooperation with VROMI, as they meet on a daily basis to ensure that VROMI also knows what the unit is doing and what it plans to do next.

Rebuilding
The major is impressed with the island’s population rebuilding their personal homes. “At first, you could have seen that people just worried about their own lives and their property, but before you know it, everyone started to help around and their spirits were high. That is impressive to us. What you see now is really going so fast, and I have tremendous respect for the island’s people,” said Zomer.
The engineers plan to work and assist where they can until the end of October and will put their work material on the Navy ship MS Karel Dorman when it leaves St. Maarten on November 1.
The Army Engineer platoon said they are happy to assist the population of St. Maarten with the rebuilding.