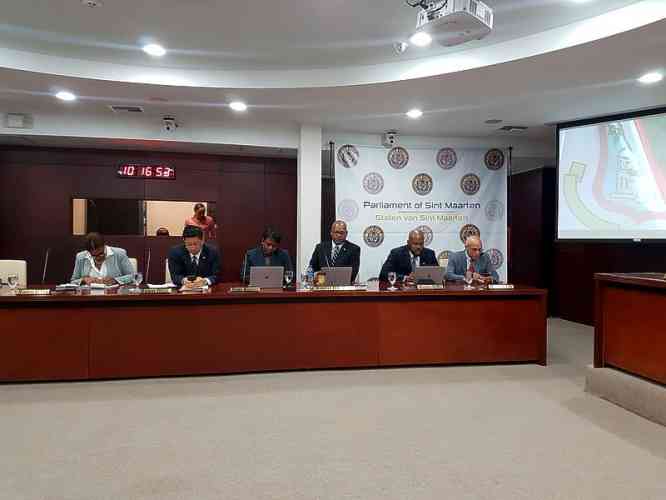 POND ISLAND–The smoke is still curling from the two dump site fires blanketing neighbourhoods and keeping children away from their school books. Firefighters continue to take measures to prevent flare up of what is said to be arson-ignited blazes.

Environment and Infrastructure VROMI Minister Miklos Giterson said Wednesday an official complaint with the goal of triggering an investigation was filed by law enforcement. “It is strongly believed that these two fires were man-made,” he said.

“Government is responsible for the wellbeing of the people and there is no question about that, but government can no longer be solely held accountable for putting the people’s lives in danger if these fires are being caused by arsonists,” Giterson said.
VROMI is still working on a long-term solution for this problem, he said: “As soon as all parties involved can come to an agreement this problem will be solved and communicated to the public.”

A meeting is scheduled for Monday to map out the best way to put an end to the constant dump fires and implement better waste management. “This dump is a monster that needs to be stopped,” Giterson said.

Health Minister Emil Lee said he had “serious concerns” about the way the dump is managed. His concerns has root in the drastically reduced price the current contractor awarded the project had offered government.
“In the past, the price to manage the dump was substantially higher and you have to wonder if the cheaper price wasn’t done at the expense of the quality,” said Lee.
The water pumps close to the dump are not working and no effort was made in the past to fix the vital equipment, Lee said.

He also disclosed that a firefighting product called “Silver X” was offer to government by a local company at cost price and free at various intervals. These offers were “rejected” by the former government. That product, supplied by Watkan Trading, is now being used to battle the recent blazes.

Justice and Tourism Minister Cornelius de Weever called on the community to not post negative images of the country online in a bid to lessen the blow to the country’s already hard-hit hurricane image.

“Post and share positive images of St. Maarten because tourism is all of our business and we can all contribute to the image of our product,” De Weever said.
Finance Minister Michael “Mike” Ferrier said all is being done to get the needed financing to tackle the country’s gigantic garbage problem and other recovery projects.
St. Maarten Medical Centre has not reported any increase in cases of respiratory-related issues, according to Lee.

Parents and guardians are urged by Education and Youth Minister Jorien Wuite to protect their children from smoke inhalation. The closure of schools for the past three days is “disrupting” for learning, but “safety of students come first.”

Prime Minister Leona Romeo-Marlin thanked firefighters for their brave efforts in containing the fire. Battling the anger-orange flames put firefighters shoulder to shoulder with their fellow firemen from Princess Juliana International Airport and the French side.

The efforts of all including the police were commended by the Ministers in the press briefing and Members of Parliament in a sitting following the press briefing.
Ministers gave their views on the fire in a press conference held in Parliament House due to the Government Administration Building being enveloped in black smoke since the weekend.