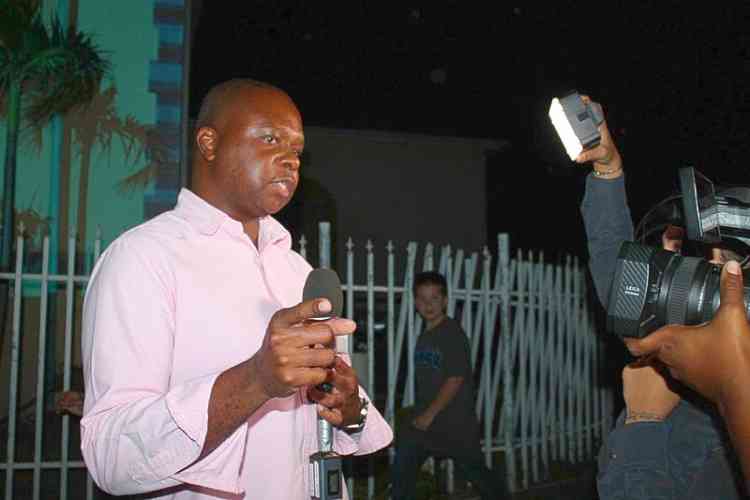 MARIGOT–St. Martin-born multimedia artist David Gumbs projected a digital light show of his creations onto the Catholic Church in Marigot on Saturday evening, where many persons marvelled at the alternating colourful and intricate designs accompanied by new age music.

The free show, sponsored by the Collectivité’s Culture Service, was held between 8:00pm and 11:00pm. Gumbs was the 2017 winner of the National Street Art Contest of the Ministry of Culture in Paris for St. Martin and Martinique.

“I was one of the winners, but the only one from St. Martin,” Gumbs explained. “It was an open call for street art applications. I wanted to show there are different ways to show street art, particularly with the work of light. This concept is based on creations that I did in China during a two-month street exhibition I had in Beijing in 2016. I realized that the patterns I used from tropical flora made sense in that context of pollution, Beijing I guess, being one of the most polluted cities. By contrast, our small island life is quite the opposite.”

A video mapping installation projected the image within the lines and contours of the building. The public also had the possibility of choosing eight different themes, to move and animate the patterns on the walls.

David Gumbs is based in Martinique where he teaches at the visual arts school. He does freelance work for theatres, dance companies and increasingly for architectural projects.