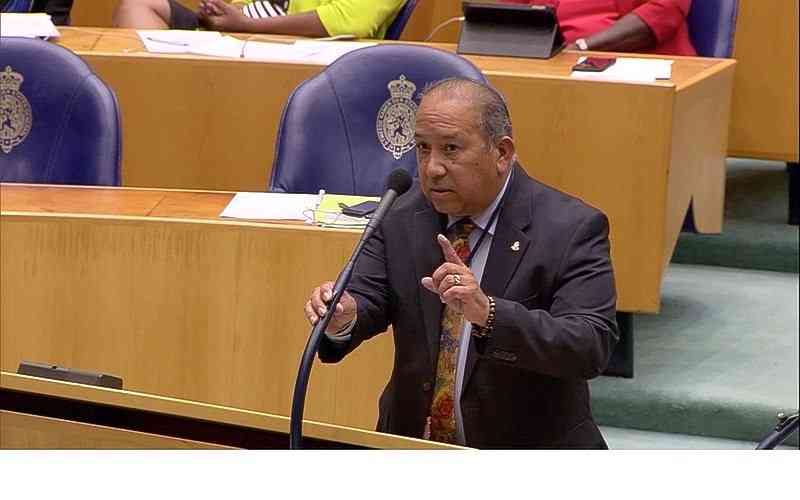 ARUBA–Aruban Parliament President Ady Thijsen does not think that he gave up too much to get his amendment to the proposed Kingdom Disputes Act passed by the Second Chamber of Dutch Parliament. “We could not say ‘all or nothing.’ Otherwise we would be back to the beginning, 10 years ago.”’

The veteran politician has therefore set his hope in the Dutch Senate (First Chamber).

His new, weakened, amendment calls for a separate section on kingdom disputes at the Council of State. Whether that is possible remains to be seen, but a majority of the Second Chamber voted in favour of the amendment to adjust the Kingdom Act accordingly.

To accomplish such Thijsen first had to scrap an important condition to get support from the Dutch MPs, namely that the arrangement would be binding for all countries including the Netherlands. The Dutch government does not want that.

The elected representative acknowledges that there is still insufficient support for this. However, Aruba is not giving up the fight, he says.

Once the Second Chamber votes on the bill after the summer recess, the Senate will consider the draft law. “They can say ‘nice, but this Kingdom Act does not meet what the assignment was.’ So, then we still have a chance that it goes back to the Second Chamber.”’

Curaçao opposed the existing bill of Kingdom Relations State Secretary Knops Raymond. Coalition member Giselle McWilliam (MAN), who already spoke out against the proposal in the Second Chamber last week, says that there is no support in The Hague at all “while that is precisely the spirit of the Kingdom Charter: support.”

“We have no vote in neither the Second- nor First Chamber, but it is hoped that the senate will let their sense of justice and democratic spirit prevail,” states McWilliam. Knops says there is understanding on the islands for his proposal.

Delegations from the Dutch Caribbean travelled to The Hague in April to emphasise that they only accept the dispute regulations based on what all four kingdom countries agreed on in 2015. That was for an independent body to make binding judgments about the legal interpretation of the charter in case of disagreement.

Mc William was positive at the time, but she has come back from that. “Politics remains political and The Hague remains The Hague when it comes to our islands.”