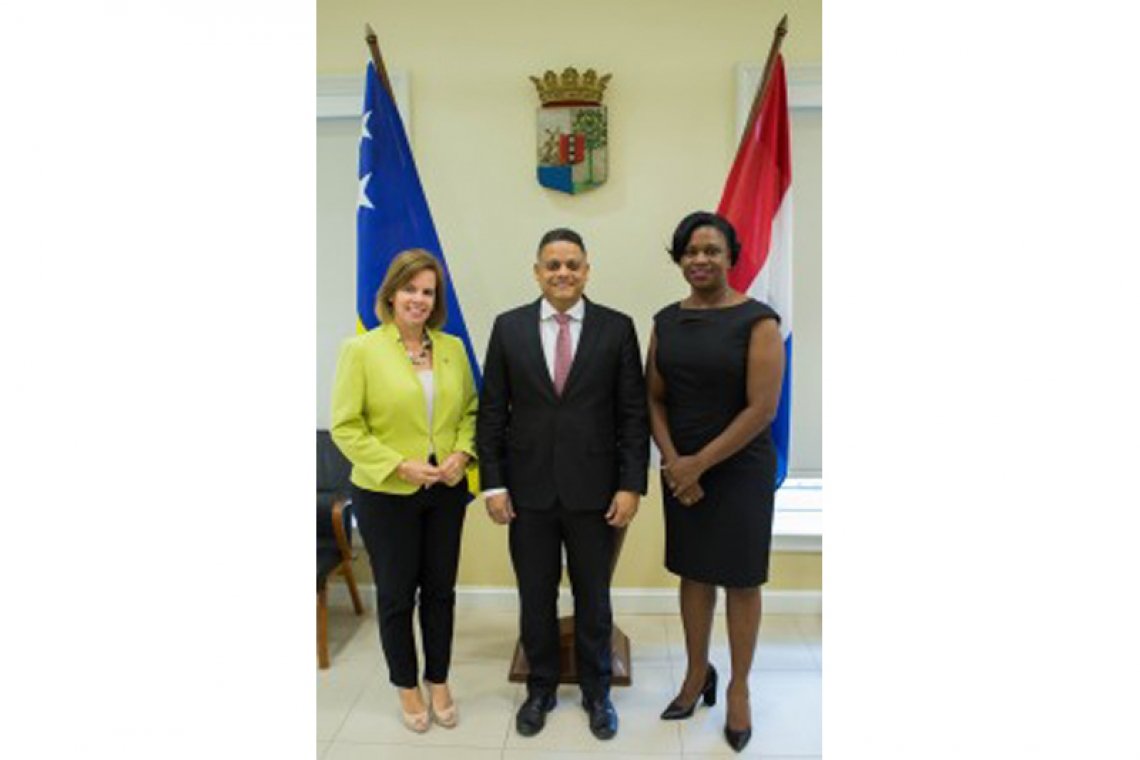 Prime Minister Evelyn Wever-Croes (left) with her Curaçao and -then- St. Maarten counterparts.

THE HAGUE/ORANJESTAD–The Aruba government is expected to close off the financial year 2019 with a small budget surplus of 0.7 per cent or close to that. The Committee for Financial Supervision Aruba CAFT has some remarks about this positive development which appears a bit distorted.

According to the fourth Execution Report, the 2019 budget year will be closed off with a financing balance of 43.1 million Aruban florins, or 0.7 per cent of the gross domestic product (GDP). The protocol between the governments of Aruba and the Netherlands states that Aruba should have a maximum budget deficit of -0.5 per cent for the year 2019.

The results of the Aruba Social Insurance Bank SVB and the General Health Cost Insurance AZV had a positive influence on the balance of the collective sector. The CAFT has requested additional information for a more complete assessment.

The higher revenues of the dividend tax (42 million Aruban florins extra) were the result of a temporary tariff reduction from 25 to 10 per cent and will not be of a structural nature. Even though the budget surplus may a bit smaller than the calculated 0.7 per cent, the CAFT considered it “positive” that Aruba will manage to comply with the budget deficit of -0.5 per cent in 2019.

The CAFT called on the Aruba government to realise a structural reduction of expenditures. The cost of personnel, 475 million Aruban florins in 2019, is still very high, but within the Afl. 476 million maximum that the Kingdom Council of Ministers set in November 2019.

However, the Afl. 475 million does not include the cost of personnel of the Interim Budget Fund Social Crisis Plan, which amounted to Afl. 2.7 million over 2019. The CAFT noted that the already-high cost of overtime was Afl. 3.2 million more than budgeted. The Kingdom government wants Oranjestad to keep working on lowering the personnel expenditures.

The fourth Execution Report showed that Aruba took Afl. 268.3 million in loans, which brings the total debt to a little more than Afl. 4.3 billion. The debt quota for 2019 was 72.9 per cent of the GDP, which is three per cent lower than at the end of 2018. The CAFT remarked that the reduction of the debt quota was entirely the result of the increase of the nominal GDP due to the general increase of prices on the island in 2019.

The revenue from direct taxes was Afl. 580.9 million, which is less than originally budgeted. This was mainly due to a disappointing collection of taxes, and an Afl. 18 million backlog in payment by refinery operator Citgo. The CAFT concluded that the intensifying of the collection drive by the Tax Office has not yielded the desired results and again asked attention for improving compliance.

The indirect taxes amounted to Afl. 594.2 million, which is lower than budgeted. The revenues from import duties were less because the sugar tax, the levy on imported water with added sugar, was not implemented in 2019.