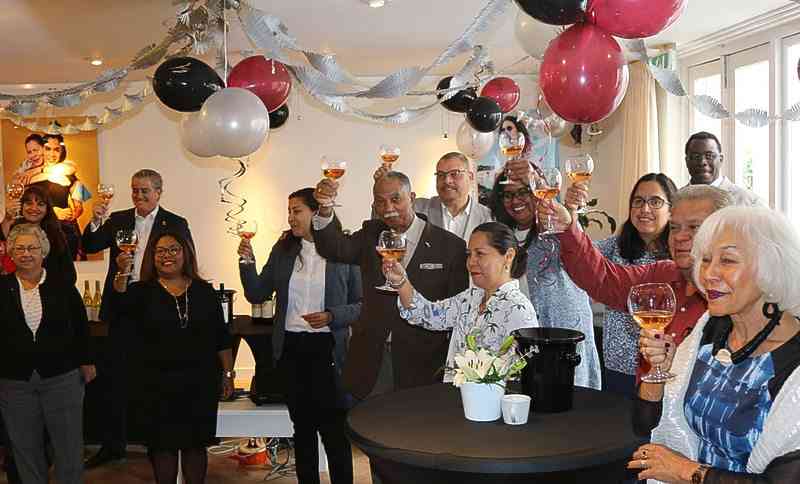 THE HAGUE–The Aruba House in The Hague celebrated its 35th anniversary last week Friday, a festive occasion hosted by Minister Plenipotentiary Guillfred Besaril in the presence of personnel, representatives of the Aruba Tourism Authority (ATA) Europe, and former employees and mentors of the Aruba House.

Politician Betico Croes inaugurated Aruba’s representation in the Netherlands on March 26, 1983, more than two years before Aruba seceded from the country the Netherlands Antilles and became an autonomous country within the Kingdom of the Netherlands. Minister Plenipotentiary Besaril in his speech looked back at this historic occasion which was attended by various then-prominent Aruba politicians.

“Aruba’s representation in the Netherlands played a cardinal role in Aruba’s history of secession and the fight for separate status,” said Besaril, who explained that after Aruba attained country status on January 1, 1986, the representative office became the Cabinet of the Minister Plenipotentiary.

The cabinet played an active role in the annual grand celebration of the island’s national holiday, Aruba Day, in the Netherlands on March 26 throughout the years. “This means that we gave the important day of March 26 a place that it deserved in history,” said Besaril, who pledged to give the historic date of March 26, 1983, proper attention.

Aruba Prime Minister Evelyn Wever-Croes addressed the guests at the event via a video message in which she congratulated the personnel of the Aruba House and thanked them. She too addressed that historic day in 1983 and honoured the fight of Betico Croes.

“From that time on, the wish of our people was to be free. Aruba knew a great visionary, a fighter and liberator – a very humble person with a unique charisma and a big heart; a person who managed to gain the confidence of his people; an architect, constructor and achiever of our separate status and our freedom,” said Wever-Croes.

She also mentioned the Aruba students in the Netherlands, whom she called ambassadors of Aruba.