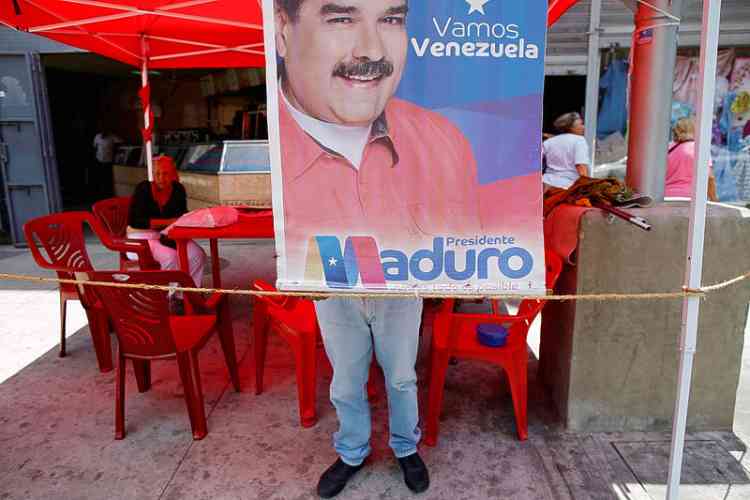 A poster of Venezuelan President Nicolas Maduro is seen in front of the National Assembly building (unseen) in Caracas, Venezuela May 10, 2019. REUTERS/Ivan Alvarado.

ARUBA–While Venezuela reopened its borders with Brazil and Aruba, the latter’s government did not find the timing “opportune” and kept the current trade and travel ban in place for now.

Venezuelan Vice President Tareck El Aissami made the announcement on Friday. The regime of embattled President Nicolas Maduro closed the border in February amid an opposition campaign to bring humanitarian aid into the troubled South American nation, which is suffering from a hyperinflationary economic collapse amid a power struggle between Maduro and opposition leader Juan Guaidó.

“We want to convert it into a peaceful border region,” El Aissami said in a state television address. “We have received assurances that our sovereignty will be respected and that there will not be interference in matters that should be dealt with by Venezuelans.”

Aruba’s government in a release said that “an opening of the border between Venezuela and Aruba at this time is not opportune.” Prime Minister Evelyn Wever-Croes explained that the move would likely lead to a new flow of refugees from the mainland that the island is not ready to handle, so the embargo would remain in place for at least a month.

Many Latin American and European countries, including Brazil, Colombia and the Kingdom of the Netherlands, recognised Guaidó as Venezuela’s rightful leader after he invoked the country’s Constitution to assume an interim presidency in January, arguing Maduro’s 2018 re-election was illegitimate.

Maduro calls Guaidó a puppet of the United States seeking to oust him in a coup. He broke off diplomatic relations with Colombia after the February aid effort, accusing it of allowing its territory to be used as a staging ground to attack Venezuela.

El Aissami said other borders would remain closed “until the positions of hostility and aggression are ceased.” That is also the case for Aruba’s Dutch Caribbean sister islands Curaçao and Bonaire as well as Colombia “because their leaders have not sufficiently assured that Venezuela’s sovereignty will be respected.”

“Hopefully wisdom prevails for the authorities of Curaçao,” El Aissami said in a broadcast on state television, “and they avoid becoming instruments of aggression against the territory of the Bolivarian Republic of Venezuela.”

“I don’t think it’s correct to set Aruba against our sister islands Curaçao and Bonaire,” reacted Wever-Oduber. “I immediately notified Prime Minister Rutte, Minister Blok and State Secretary Knops (of the Netherlands–Ed.) to assist Aruba in preventing the borders from being reopened.”

“I also contacted Foreign Affairs and the position is clear: There is only one border; that between the Dutch Kingdom and Venezuela.

“Venezuela apparently did not get the message as they later sent an official note to The Hague indicating the border had reopened and we were informed right after, that boats and planes were ready to leave. A private aircraft had already left Caracas on the way to Aruba.”

Government then decided not to give any more landing rights to airplanes from Venezuela in the general interest. The private jet had already landed at the island’s airport by then, but no other flights were allowed.

The South American nation’s socialist government ordered the borders with Aruba, Bonaire, Curaçao, Brazil and Colombia closed three months ago as the opposition tried to deliver food and medical supplies.

The aid was provided largely by the United States, a key ally of opposition leader Juan Guaidó, who is recognized by more than 50 nations as Venezuela’s rightful president. Maduro dismissed the aid push as an infringement on Venezuela’s sovereignty and a crudely disguised US-backed attempt to remove him from power.

The bulk of the assistance was stored across the border in Colombia, while smaller amounts were held in Brazil and the Caribbean. Opposition leaders tried driving the aid across the land borders in trucks but were blocked by state security forces.

El Aissami said Maduro’s government held talks with high-level officials in Aruba and Brazil and said they had reached the “necessary agreement” to ensure that a repeat of the events on February 23 would not occur again. He said Aruba’s leader in particular had been “emphatic on the non-interference in the internal affairs of Venezuela.

“Not, however, with the other countries who share a border with our territory,” he added. Until the other two Dutch Caribbean islands and Colombia assure Venezuelan authorities that they will cease all “hostility” and attempts to destabilize Maduro’s government, those borders will remain closed.

Relations between Venezuela and its neighbours have grown increasingly prickly as many leaders in the region have moved to support Guaidó’s claim to the presidency and efforts to remove Maduro from power.

The border closure has had an especially strong impact on the tens of thousands of Venezuelans who typically cross into Colombia on any given day, searching for food, medicine or a new life outside the struggling nation. Many are now crossing illegally into the country through dozens of illegal dirt pathways known as “trochas” where armed criminal groups charge for passage and frequently rob or assault those who are trying to enter.