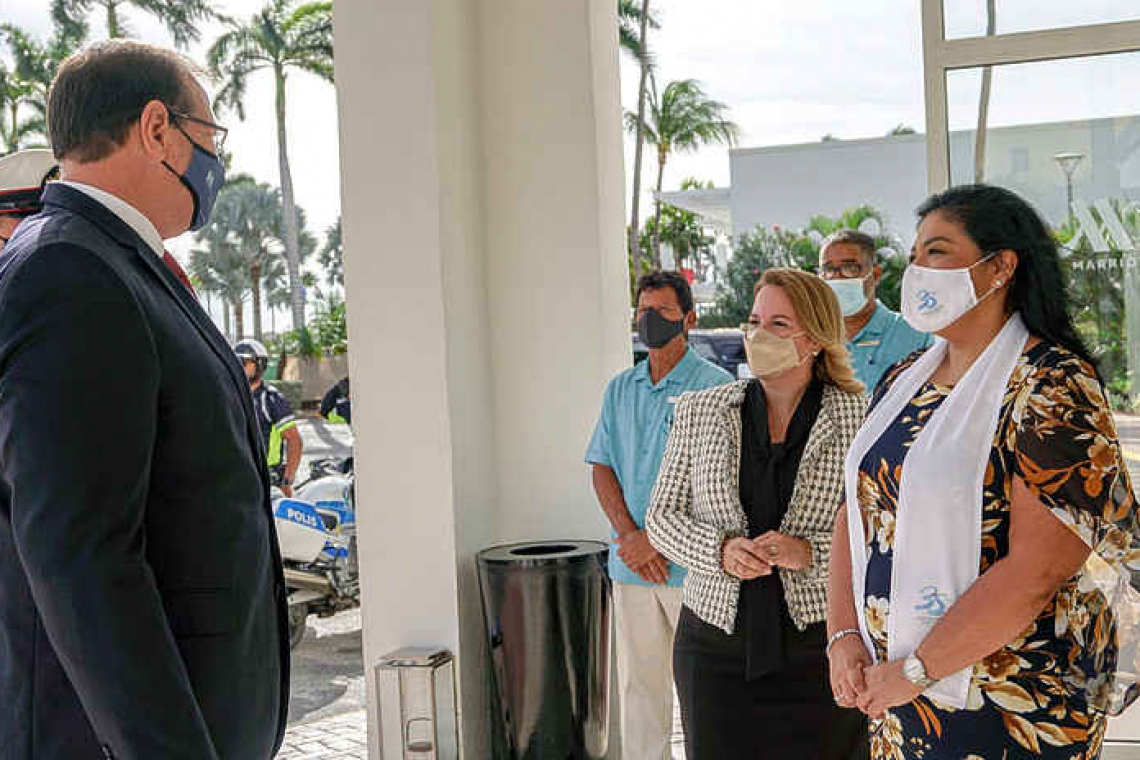 Aruba Governor Alfonso Boekhoudt (left) was one of the dignitaries who attended Tuesday’s conference to observe Aruba’s 35-year existence as an autonomous country with the kingdom. He was welcomed at the entrance of the conference by Prime Minister Evelyn Wever-Croes and Finance Minister Xiomara Maduro (right). (Aruba government photo)

ORANJESTAD–Aruba on Tuesday celebrated its 35th anniversary of being an autonomous country within the Dutch Kingdom with a conference titled “Aruba belongs to all of us”.

Present at the conference were Governor of Aruba Alfonso Boekhoudt, ministers of the Wever-Croes II cabinet, Members of Parliament, a number of former politicians and persons who played an important role in Aruba’s 35-year development as an autonomous country.

Prime Minister Evelyn Wever-Croes in her opening address at the one-day conference touched on the struggle to achieve an autonomous status in 1986, the things that still remained to be accomplished and the country’s future.

The struggle was also typified by determination and vision, Wever-Croes said – “vision to know where we wanted Aruba to go and determination to get it done. Aruba had great and visionary leaders that engaged in the struggle and afterwards knew how to develop our country that we now live in.”

In the days prior to the conference, Wever-Croes met with a number of people who played an important role in the struggle for more autonomy and after that during the developing of country Aruba. The prime minister met with labour union leaders, politicians and journalists of that time, as well as former secretaries of former Council of Ministers.

After the hard struggle to become a country, all focus was on quickly developing Aruba’s economy, making Aruba a pioneer in the region, specifically in tourism. The question that came up was whether sufficient attention was giving to forming the people, so they know the true value of being an autonomous country and that this was something to keep fighting for.

“Aruba developed as a pioneer country in the region and in the world where tourism is concerned. Our cordiality and stability have attracted visitors from all over the world. We have accomplished a lot in 35 years, but there are things that we did not achieve as yet,” said Wever-Croes.

She noted that in the coming period, Aruba needs to focus on accomplishing matters such as the formation of the people, preparing better for the future, for a stronger, more resilient Aruba, protecting the island’s nature and documenting and sharing Aruba’s history of the struggle for an autonomous status.

“Thirty-five years after our autonomous status, coming out of a pandemic, I compare Aruba with a boat navigating the rough seas. But inspired by our struggle for an autonomous status, our strength is in unity, vision and determination, just as it was all those years ago. Now, that same unity, vision and determination will guide us through the rough seas, [to – Ed.] enter calm waters and reach our destination,” said Wever-Croes.