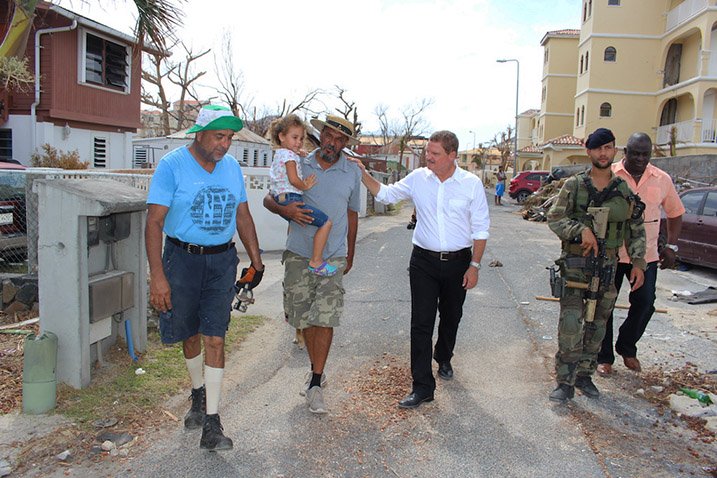 ORANJESTAD–Aruba Prime Minister Mike Eman paid a short visit to St. Maarten on Wednesday. He met with several residents as well as the military from Aruba currently stationed on the island.

Eman visited Simpson Bay, one of the districts with a large number of residents who originate from Aruba. Walking through the Simpson Bay Road and the Sister Modesta Road, he saw with his own eyes how bad the destruction was and how many families were severely affected.

“I am very moved by what I see here. Family members were evacuated by Aruba, but in many cases the head of the family stayed behind and has started to clean up and rebuild the house,” said Eman, who applauded the resilience and positive spirit of the people he met.

Dennis Hillison, whose wife hails from Aruba, told the Prime Minister that with the evacuation of his family, he could focus on reconstruction without having to worry about their safety and wellbeing. Living in St. Maarten for some 40 years, Hillison said that of the some six hurricanes, Irma surely had been the worst.

His house has lost part of the roof and there is extensive water damage. “We are trying to rebuild as fast as we can because it is the only way to survive. You have to go on.” The family has a restaurant nearby which has re-opened, and even though there was no food to offer, some 60 persons came by to get something to drink.

Another inhabitant whose family also hails from Aruba told Eman he was very happy to see him. He and his four brothers who have lost almost everything, except for their lives, the man said. Together with other family members they have started to clean and repair the restaurant and bed & breakfast that they own. “We are strong, we support each other, we move on, we are Arubans.”

Resident Peterson, whose first name was not given in the press release of the Aruba Government Information Service, echoed the message of the other Arubans Eman spoke with. “We have to continue living. We keep fighting. We cannot let a hurricane determine our lives. We have a future, we have each other,” said Peterson, part of whose family has also been evacuated to Aruba.

Peterson, who moved back to St. Maarten some 30 years ago when the Lago oil refinery in Aruba closed, said that the family property was destroyed, much worse than with Hurricane Luis in 1995. “It is not only us. The entire of St. Maarten was destroyed. We have to put our suffering aside and get to work now, move forward.”

Visiting the Aruban militaries of the Arumil, Eman heard from them personally how they are helping in the aftermath, distributing food and water, patrolling and cleaning the streets, securing vital infrastructure. The Arumil came to St. Maarten before the hurricane and just as with the massive earthquake in Haiti, the Aruban militaries were integrated in the Dutch Defence contingent.

Military Jeremiah Dijkhoff spoke with the Prime Minister as he returned from patrolling. Dijkhoff was in St. Maarten since last week Monday and passed through the hurricane together with residents in a shelter where he provided assistance. Immediately after the hurricane had passed, the Arumil went to work. Dijkhoff said that the situation was much calmer now and the streets safer with less looting and stealing.

Dijkhoff’s colleague Jean Marc Trimon told Eman that the people were happy that they were there to help, also because the Papiamentu made the communication easier with those residents originating from Aruba and Curaçao. “While we stand at road blocks, people tell us that they are grateful for our help in these harsh times,” said Trimon.

Eman thanked the Arumil for their dedication and hard work, and said he was happy to hear that their efforts were appreciated and that they were able to help with the evacuation of people to Aruba. He also thanked the members of the Aruba Police Force and the members of the Red Cross from Aruba. “We are proud of the good work you are doing.”

The Prime Minister promised that he would continue to drum up support for St. Maarten back in Aruba. “Help is of vital importance. The reconstruction work is enormous. Many people will lose their jobs. The social and economic consequences are enormous. St. Maarten needs and deserves our every support.”