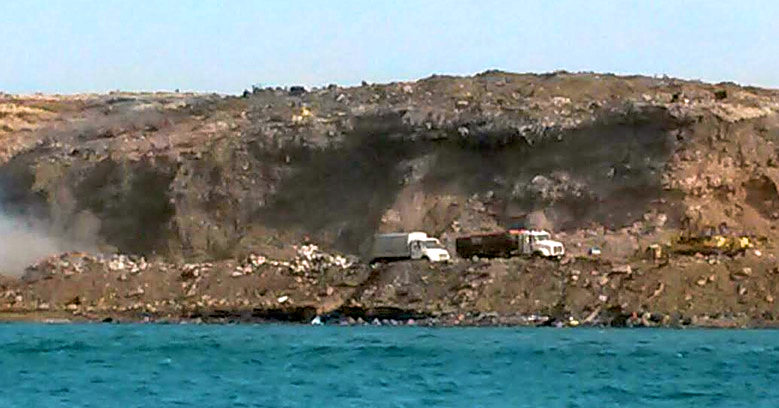 ARUBA–St. Maarten is not the only Dutch Caribbean island facing a great challenge with a chock-full toxic landfill that poses a public health threat. The situation is the same in Aruba, with the difference being that a group of residents, united in the Parkietenbos Foundation, has given the local government an ultimatum to come up with a solution.

Aruba’s Parkietenbos Landfill, locally known as the dump, has the same characteristics as the St. Maarten sanitary landfill: basically everything gets dumped there, the massive heaps of garbage mixed with sand produce a terrible smell and emit toxic fumes, and many times it is on fire.

Residents in neighbourhoods nearby such as Simeon Antonio and Wayaca are literally sick and tired – tired after years of complaining, filing petitions, sending urgent letters, sitting at meetings with the Aruba Government and speaking with the media. And they are sick of the fumes and smoke, with many residents having developed diseases that they attribute to the landfill, such as asthma and cancer.

Last Sunday, the Parkietenbos Foundation decided that enough was enough. The organisation sent a letter to Prime Minister Mike Eman and Minister of Energy Affairs Mike de Meza in which an ultimatum was set: come up with a serious plan within one week to address the landfill debacle or get reported on an international level.

The Foundation said it will turn to international organisations to report a “nature calamity” and to let them know that Aruba is violating the Cartagena Protocol on bio-security. The Dutch Government will also be informed of the violation. According to residents, their rights to be able to breathe clean air are continuously being infringed on.

The Parkietenbos Foundation had several meetings with Eman and De Meza last year during which the Ministers were informed of the “disastrous and dangerous situation” at the dump. At that time, the Ministers promised short- and long-term solutions, but there has been no real action so far.

Eman announced late last year that he wanted to close the dump early 2017. He acknowledged that the landfill was causing a serious health issue and stated that the garbage would go to the Ecogas facility where it would be turned into gas and compacted for export abroad. A wall would be constructed around the dump to prevent waste from spilling into the sea. Once the landfill had been sanitised, a layer of solar turf would cover it.

However, the plan met great resistance from the employees of the local waste management company Serlimar who feared that they would lose their jobs.

The plan to stop the depositing of garbage and the sanitation of the landfill was abandoned and the dumping continued. Government also had financial constraints to consider: cleaning up the landfill would cost many millions, money that is not available in the budget.

The landfill, created in the 1960s and located on the West coast next to the sea and mangroves, is full and contains many toxic materials that emit harmful fumes. Already in 1996 it was determined that the landfill was severely contaminated with heavy metals and polychlorinated biphenyls (PCBs).

The landfill reached its capacity some eight years ago. According to the Parkietenbos Foundation, the government has been neglecting its task and keeps dumping garbage. Meanwhile the dump is regularly on fire, the smoke sometimes reaching as far as Oranjestad.

“The dump has become a monster. It is a horrible sight, and without proper security and inspections it is a great danger to the public health,” Parkietenbos Foundation Chairperson Edith Koolman said in a recent interview.