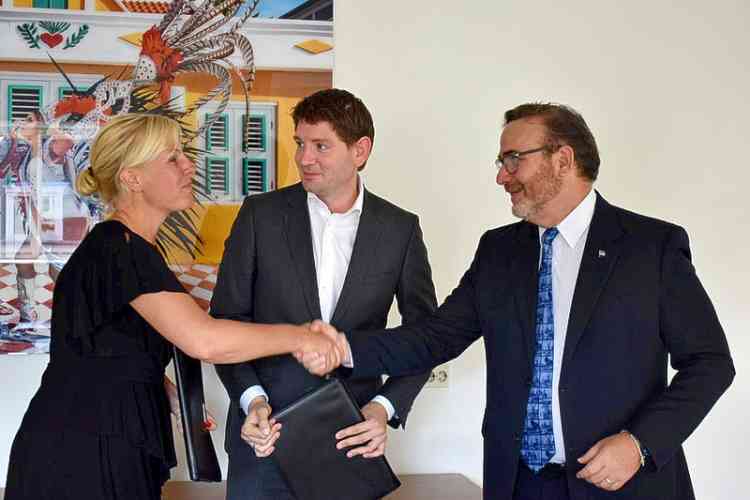 Aruba Minister Glenbert Croes (right) shakes hands with Member of the Second Chamber of the Dutch Parliament, Attje Kuiken at the start of a meeting in The Hague on Monday, where the minister presented the Social Crisis Plan. In the centre: Chairman of the Second Chamber’s Permanent Committee for Kingdom Relations, Jan Paternotte.

THE HAGUE–Aruba Minister of Social Affairs and Labour Glenbert Croes met with several members of the Dutch government, ministries and institutions late last week and earlier this week to present the Social Crisis Plan (SCP).

The SCP is a comprehensive plan of the Aruba government to tackle the grave social ills on the island, and involves four ministries: Education, Justice, Public Health and Social Affairs. No fewer than 31 projects are currently being executed as part of this plan.

The plan came about after the killing of the brothers Rishandro Anastacia (5) and Roshandrick Frans (3). Rishandro died late November 2017 as a result of frequent physical abuse by his mother and stepfather. After Rishandro’s death, it became clear that his younger brother had been missing for several months. His stepfather admitted to having killed and buried him.

Child abuse is a big problem in Aruba. One in every five children endures domestic violence, sexual abuse, physical abuse or neglect, according to the Aruba Children’s Rights Task Force. After the death of the two brothers, child abuse was put on the political agenda, and Prime Minister Evelyn Wever-Croes and her cabinet are taking measures.

Considering that the Netherlands in principle has expressed technical and financial support for the SCP and that the Dutch government is an important partner in this matter, Croes decided to present the plan in The Hague, and to provide an update on the implementation of the projects.

He presented the SCP to Dutch Minister of Social Affairs and Labour, Wouter Koolmees and State Secretary of Public Health, Wellbeing and Sports, Paul Blokhuis late last week. A presentation also took place at the Ministry of Defence, which wants to work with Aruba to recruit local youngsters for a career in Defence.

The Aruba Ministry of Social Affairs and Labour will organise a job fair late October for youngsters aspiring to a career in Defence, young people who want a second chance in life and those who want to further develop themselves.

“We will work closely with the Ministry of Defence in the pilot project Recruiting in the West,” said Croes.

Croes presented the SCP to the Permanent Committee for Kingdom Relations of the Second Chamber of the Dutch Parliament on Monday. Committee Chairman Jan Paternotte of the Democratic Party D66 and Committee Member Attje Kuiken of the Labour Party PvdA were present at the meeting. Croes said it was a very positive meeting and that many questions had been posed. It was acknowledged that several countries within the Kingdom have severe social problems.

The SCP was also presented to Chairman Raymond Gradus of the Aruba Committee for Financial Supervision CAFT on that same day. Croes explained that meeting with the CAFT was important because of the SCP’s financial implications. He met separately with National Ombudsman Reinier van Zutphen and his team, and with the Human Rights Council.

Before travelling to the Netherlands, Croes had presented the second SCP report to the Aruba Council of Ministers and to the Aruba Parliament. The SCP includes projects for the prevention of child abuse, for early stage assistance and for crisis assistance. The working method Signs of Safety is used and a Youth Desk has been set up where courses are being offered.

The objective is to maximise the system of protection to enable all children to grow up in a safe environment where they can develop in a positive manner. The SCP also aims to prevent children from taking a wrong turn, and to give those who have done so a second chance to live a secure and productive life.

“All children and youngsters have to be able to feel safe in Aruba. That is why we are also working on a child protective system, assisting people with social problems,” said Croes.