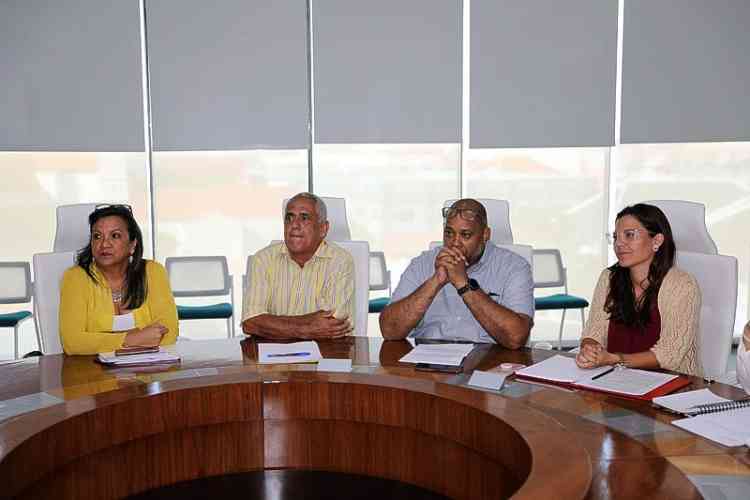 A section of the delegation of Aruba teachers and their labour unions during the meeting with Prime Minister Evelyn Wever-Croes on Tuesday. (Aruba government photo)

ORANJESTAD–A delegation of teachers and their labour unions Simar and Seppa met with Aruba Prime Minister Evelyn Wever-Croes on Tuesday to share their grievances about the lack of investments in education.

The meeting was a follow-up to the event of last Friday whereby protesting teachers submitted a document with their grievances to the Prime Minister. The teachers said they didn’t want to meet with Education Minister Rudy Lampe because they said they have lost confidence in him.

According to the teachers, Minister Lampe refuses to listen to their critique about his policy. Early July 2019, the teachers submitted a petition with about 100 signatures asking the Minister to leave. Last Friday, the teachers again demanded the Minister’s resignation. Lampe tried to receive the petition from the teachers, but the protestors were so angry that eventually the Prime Minister came outside to take the document from them.

During the meeting on Tuesday, Wever-Croes listened intently to the teachers’ grievances. She expressed her appreciation and respect for the teachers, but, as she did last Friday, she emphasised that the current financial crisis of Country Aruba also has consequences for education.

The Prime Minister explained that far-reaching measures needed to be taken to improve the country’s finances before government could make the much-needed investments in education. She said the meeting with the teachers and their unions took place in a respectful and to-the-point manner.

“The teachers brought forward their various points of concern. We agreed that I will relay the issues to the other ministers and that I will get back to them. I have deep respect for teachers who teach our children and help to form our next generation. Our goal is that once we get out of this financial crisis, we will invest more in education, in teachers and innovations in education,” Wever-Croes said.