Home Headlines & Top Stories As moneylender The Hague is allowed to set conditions | THE DAILY... 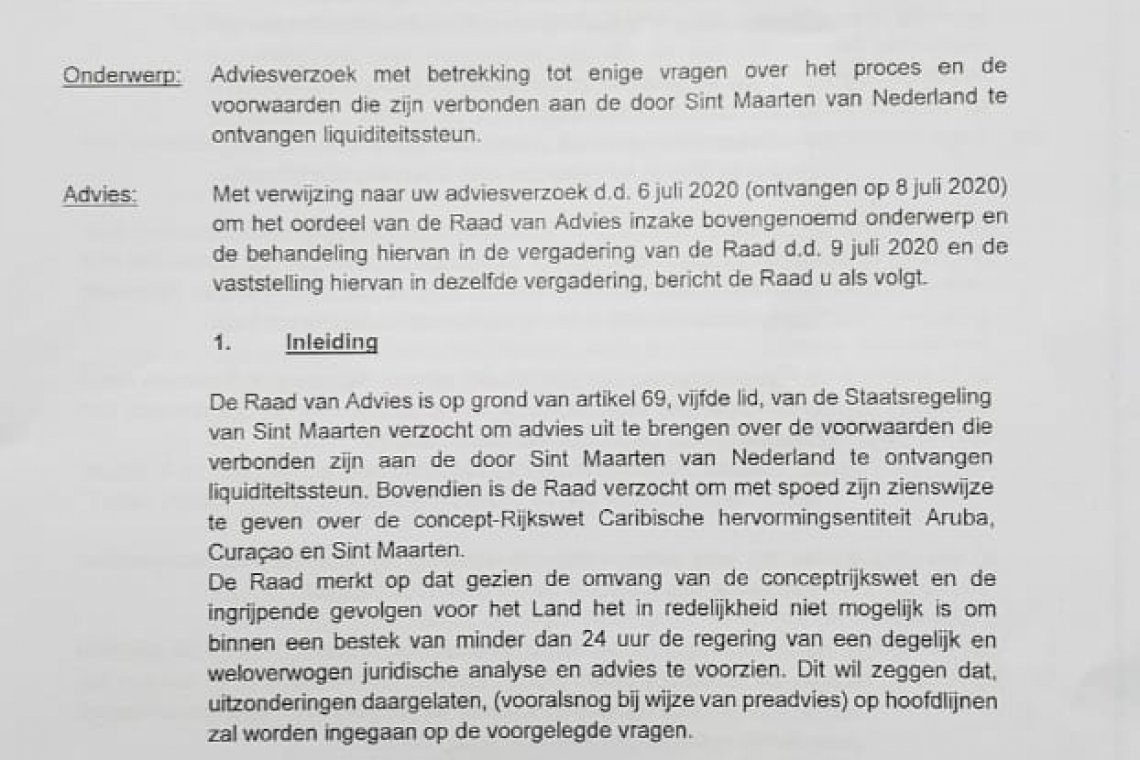 The St. Maarten government on July 6 asked the Council to render an advice about the process and the conditions of the Dutch liquidity support. The Council was asked to look into a number of questions.

The Daily Herald has obtained a copy of this advice, just as this newspaper received the July 28 advice with regard to the draft Kingdom Consensus Law regulating the Caribbean Reform Entity (CRE) on which it published an article in the Monday, August 31, edition.    The moneylender is in principle free to set conditions it desires to the loan, stated the Council, which compared the situation to a contract between a client and a commercial bank. The bank sets conditions to secure, as much as possible, a situation where the loaned money, plus interest, is repaid.

Therefore, in principle, it was not improper that the Netherlands asked for assurance in an alternative form by setting the condition that St. Maarten commit to, for example, a draft Kingdom Law.

Also, the law does not state that mutual assistance, based on article 36 of the Kingdom Charter, must be unconditional and as such legally enforceable. Civil law states that when one of the parties considers the preconditions unacceptable, that party is free not to commit.

In the council’s opinion, the Netherlands or the Kingdom in principle may set non-financial conditions to the providing of a loan. The conditions did not “drop out of the clear blue sky,” the Council noted.

The need to set conditions apparently was the result of the findings in reports of the International Monetary Fund (IMF), and the recommendations of various institutions, including the Committee for Financial Supervision CFT, the General Audit Chamber, the Ombudsman, the Central Bank of Curaçao and St. Maarten (CBCS), the Social Economic Council, the Foundation Government Accountant’s Bureau SOAB and the Council of Advice.

Conditions should be appropriate. Setting arbitrary conditions would be against the general principles of good governance. In this case the conditions were not arbitrary for two reasons: the conditions to approve legislation for the second tranche liquidity support were already in preparation for a long time, and the conditions in the country package originated from the many recommendations in the area of much-needed reforms in reports of vested institutions and organisations.

Insufficient follow-up was given to these recommendations, noted the council. The CFT used the term “incentive-of-pay-for-performance programme” in its advice to the Kingdom Council of Ministers, meaning the use of financial support to stimulate reforms – reforms which the IMF had already strongly advised, and if not executed would result in an even more worrisome situation for St. Maarten.

Apparently, the lack of forceful handling by governments in the past resulted in the Netherlands finding it necessary to set conditions. The council said it did not see great objections to the setting of conditions from a civil law perspective, and not in terms of the general principles of good governance.

However, the council did see objections as to the high speed with which the Dutch government sought unconditional approval for the draft Kingdom Consensus Law to establish the CRE. This could be perceived as abusing the circumstances, seeing the high time pressure that was applied. This in itself could construe a violation of the basic principles of good governance.

According to the council, the mutual treatment by the Dutch and the St. Maarten government in the consultation process could have been “prettier.” It was not clear to the council why liquidity support could not be provided for another month based on the already-existing conditions.

St. Maarten, being in a precarious financial position, and with insufficient and little to no alternative financing options, from the onset was in a very weak negotiation position with the Netherlands.

The council mentioned a situation in which the country is facing insolvency. In this scenario, whereby the country will no longer be able to comply with its obligations, higher supervision can be a consequence, resulting in complete annihilation of the country’s autonomy.

The council advised the St. Maarten government to do all in its power to remain in consultation within the Kingdom (read: the Dutch government) and, if possible, to reserve more time and to reach an acceptable consensus through dialogue, taking into account the country’s precarious situation.