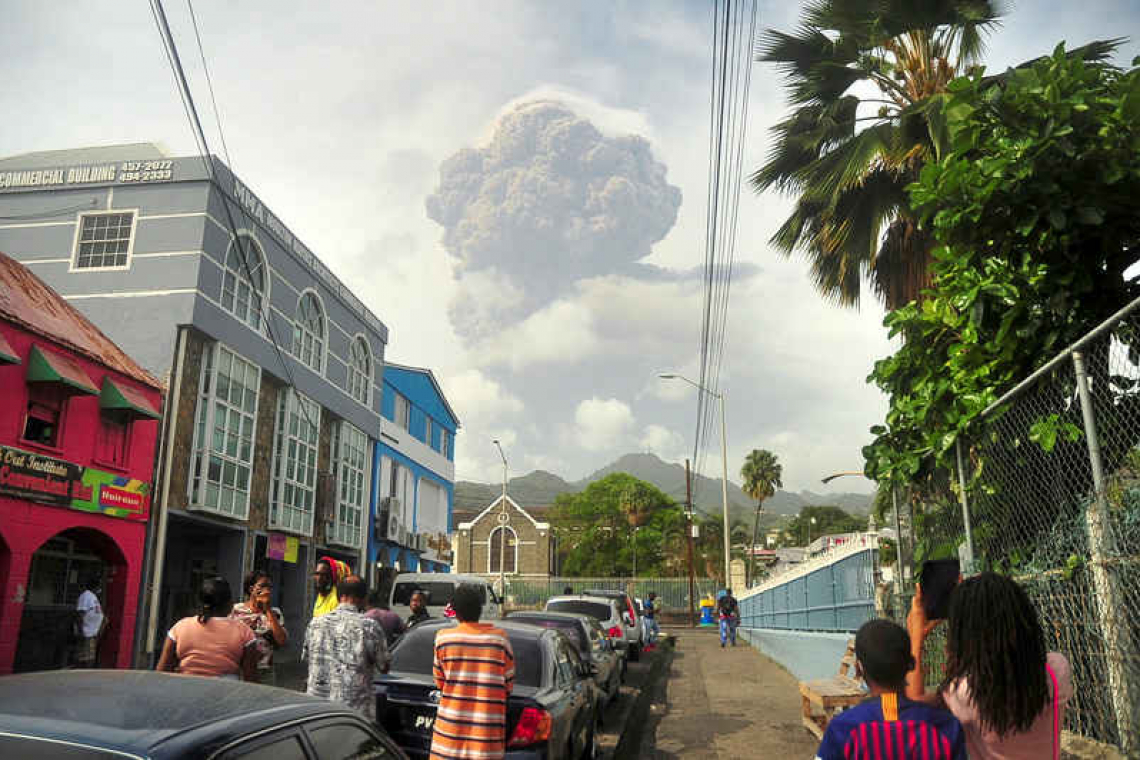 Ash covers palm trees and a church a day after the La Soufrière volcano erupted after decades of inactivity, about five miles (eight kilometres) away in Georgetown, St. Vincent and the Grenadines. Photo credit: Reuters/Robertson S. Henry.

RABAKA, St. Vincent–The tiny eastern Caribbean island of St. Vincent was blanketed with a thin layer of ash and a “strong sulphur” smell hung in the air on Saturday, a day after its La Soufrière (French for sulphur outlet) volcano spectacularly erupted after decades of inactivity.

The volcano’s eruption on Friday pumped dark clouds of ash some 10 kilometres (km) (six miles) into the air, forcing thousands from surrounding villages to evacuate.

Rumbling noises continued to emanate from the volcano, with ash coating rooftops, cars and roads in Kingstown, the capital of St. Vincent and the Grenadines. Videos from St. Vincent showed a ghost-like landscape.

On Sunday morning, St. Vincent’s National Emergency Management Organisation (NEMO) said there was a huge power outage after “another explosive event” at the volcano. However, by 12:00pm Eastern Time, power had been restored, residents said.

A Reuters witness in the town of Rabaka, about two miles from the volcano, said the ground was covered with about 12 inches (30 centimetres (cm)) of ash and rock fragments from the blast. Ash clouds blotted out the sun, giving the sky a bleak twilight look.

Prime Minister Ralph Gonsalves said it was unclear how much more ash the volcano would vent out, adding that more than 3,200 people were now in shelters.

“All I’m asking of everybody is to be calm,” Gonsalves told reporters on a visit to a shelter.

St. Vincent and the Grenadines, where just over 100,000 people live, has not experienced volcanic activity since 1979, when an eruption caused approximately EC $100 million in damage. La Soufrière’s eruption in 1902 killed more than 1,000 people.

The volcano started showing signs of activity in December, spewing steam and smoke and rumbling away. That picked up last week, prompting Gonsalves to order an evacuation of the surrounding area late on Thursday.

Early on Friday it finally erupted. Ash and smoke plunged the neighbouring area into near total darkness, blotting out the bright morning sun, said a Reuters witness, who reported hearing the explosion from Rose Hall, a nearby village.

Smaller explosions continued throughout the day, Erouscilla Joseph, director at The University of the West Indies Seismic Research Centre, told Reuters, adding that this kind of activity could go on for weeks if not months.

“This is just the beginning,” she said.

“The ash plume may cause flight delays due to diversions,” the centre said on Twitter. “On the ground, ash can cause discomfort in persons suffering with respiratory illnesses and will impact water resources.”

In the tourist island of Barbados, about 178km (110 miles) from St. Vincent, the meteorological services agency said varying intensities of ash were impacting the island. Videos posted on social media showed a thin layer of ash coating cars and even the country’s airport, which remains closed. Ash fall was said likely to affect the Grenadines, St. Lucia and Grenada as well.

Local media have in recent days also reported increased activity from Mount Pelée on the island of Martinique, which lies to the north of St. Vincent, beyond St. Lucia.

Some 4,500 residents near the volcano had evacuated already via ships and by road, Gonsalves said at a news conference on Friday. Heavy ash fall had halted the evacuation efforts somewhat due to poor visibility, according to St. Vincent’s National Emergency Management Organisation.

“The place in general is in a frenzy,” said Lavern King (28), a shelter volunteer. “People are still being evacuated from the red zone; it started yesterday [Thursday – Ed.] evening and [continued] into last [Thursday] night.”

Gonsalves said that depending on the extent of the damage, it could be four months before evacuees could return home.

Welling up with tears, he said neighbouring islands such as Dominica, Grenada and Antigua had agreed to take evacuees in and cruise lines could ferry them over – as long as they got vaccinated first.

That though could prove a challenge, said opposition senator Shevern John (42).

“People are very scared of the vaccine and they opt out of coming to a shelter because eventually they would have to adhere to the protocol,” she said. Shelters are also having to limit the number of evacuees they take due to COVID-19 protocols.

Vincentians would have to wait for further scientific analysis to know what steps to take next, she said.

“It can go for a few days or a few weeks,” she said. “At the moment, both ends of the island are covered in ash and very dark.”

Authorities say they are awaiting scientific findings before announcing what further steps to take. ~ Reuters ~